An unrestricted free agent, Jacksonville Jaguars wide receiver D.J. Chark might want to seek an opportunity to win when hitting the open market after the Super Bowl concludes. Meanwhile, few anticipated the Philadelphia Eagles to have the first-year success they enjoyed under rookie head coach Nick Sirianni in which they made it to the postseason.

Clearly some of the changes made, such as rolling with Jalen Hurts as the full-time starter in Philly paid off. Now the team wants to build around their 23-year old quarterback as they alluded to in their season-ending press conference.

As they formulate their plan for making sure Hurts takes a second-year leap as a starter instead of regressing to the mean in his third season in the NFL, they will certainly have to add to the on-hand talent in the receiver group. Despite being selected ahead of players such as Justin Jefferson, Tee Higgins, and Chase Claypool, Jalen Reagor just hasn’t proven to be a playmaker since he left TCU for the pros.

There’s no need to give up on Reagor yet, but they would be foolish to enter 2022 with DeVonta Smith, Quez Watkins and Reagor as their top options at wideout.

This is why the report from ESPN’s Jeremy Fowler suggesting Howie Roseman could look into signing 2019 Pro Bowl receiver D.J. Chark makes sense. With the recent retirement of Brandon Brooks, the Eagles project to start the 2022 offseason with over $25 million in cap space.

Jalen Hurts could benefit from addition of D.J. Chark

The Eagles found something special with their run-heavy RPO attack last season, but they have been too reliant on their ground approach at times due to a lack of reliable options through the air. Jalen Hurts will have to continue making strides as a passer, both with his accuracy and working to overcome inconsistency issues that plagued the offense as a whole.

One of the ways the organization can help Hurts along is by supplying him with weapons everywhere he looks. DeVonta Smith looks primed for a No. 1 receiver role in Philly for the next 10 years, but as we’ve seen before, they need more than just him and Dallas Goedert to keep defenses on their toes.

Signing D.J. Chark could add both size and speed, filling the void in the receiving corps the Eagles were searching for when they signed Alshon Jeffery back in 2017. The 6-foot-4 wide receiver’s big frame also helps him come up with 50-50 balls in the red zone. He also typically hasn’t been plagued by drops, unlike Nelson Agholor. Across four years, Chark’s career-high in drops for one season is four dropped passes when he was targeted 118 times in 2019.

The Eagles also might be able to buy low in a sense. Chark is coming off an injury-riddled 2021 that allowed him to play just four games after experiencing a fractured ankle in October. It also doesn’t help that the year before, Chark missed three games as well, finishing with 706 yards. While former LSU wide receiver will be just 26 years old by Week 1, he’s also never made it through a full season.

Signing Chark could be a great way for the Eagles to add to their offense without having to gamble by investing more high draft picks at the position. Ideally, they can add Chark on a short-term prove-it deal and reap the benefits before deciding whether they want to retain him long-term, or if maybe one of their younger receivers steps up with more time to grow. Either way, Philly fans should keep an eye on D.J. Chark this offseason when dreaming of their 2022 Eagles WR group. 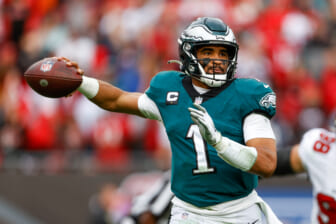