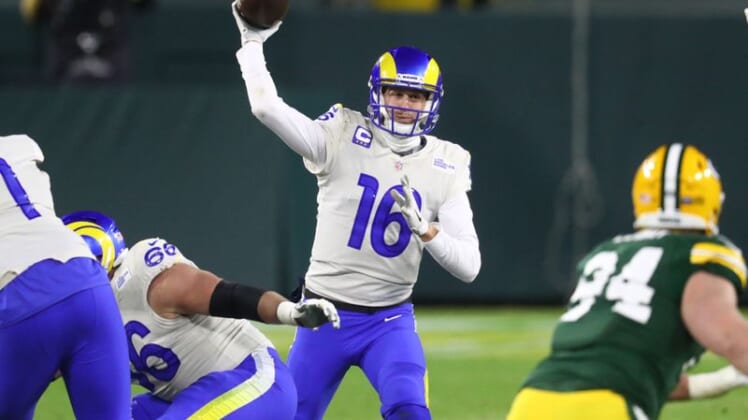 It was a trade that shook up the NFL in a big way this past Saturday evening. The Detroit Lions dealing Matthew Stafford to the Los Angeles Rams for fellow former No. 1 pick Jared Goff and two first-round picks as the centerpieces.

Rarely do we see a trade of this ilk happen in the NFL. Two players who were seen as franchise quarterbacks just a couple short seasons ago being moved. For a Lions team likely set to rebuild under first-year head coach Dan Campbell, the trade is interesting in that it seemingly commits them to a struggling veteran quarterback instead of a rookie signal caller.

With that said, we have learned to expect the unexpected when it comes to trades within the NFL. Could that lead to something more shocking?

According to Peter Schrager of Fox Sports, multiple teams called the Rams about the possibility of trading for Goff prior to Saturday night’s blockbuster with the Lions. How accurate this report is remains to be seen. At first glance, the belief was that Los Angeles actually sent the Lions more in a trade for Stafford simply to rid itself of Goff’s bloated contract.

Goff, 26, is playing under a four-year, $134 million deal that’s set to run through the 2024 campaign. He’s also coming off a disastrous season that saw the former top pick put up just 20 touchdowns against 13 interceptions. All said, Goff has turned the ball over 32 times in his past 30 regular-season starts.

These two factors don’t seem to be indicative of someone other teams might show interest in. It’s also important to note that Detroit could take a chance on Jared Goff for at least the 2021 season. It would be under the guise of hoping he can return to 2018 form when Goff led Los Angeles to a Super Bowl appearance while putting up 32 touchdowns against 12 interceptions.

With all of that said, the Lions seem to be in a unique situation with Jared Goff. If other teams are indeed interested in the quarterback and the compensation fits, there’s every reason to believe Detroit will entertain a trade.

The Lions are coming off a five-win season. They don’t have the skill-position talent around Goff for him to revert back to earlier-career form. The team is about to head into a full-scale rebuild mode. It makes very little sense to retain Goff long-term without hope of contending and while impacting his trade stock moving forward.

The New York Jets, Miami Dolphins, New England Patriots, Houston Texans, Indianapolis Colts, Denver Broncos, Chicago Bears, San Francisco 49ers and Washington Football Team are among those who will be looking to add a quarterback this offseason. If a Jared Goff trade can net Detroit multiple mid-round picks, the team has to think long and hard about that possibility.

The Lions are picking seventh overall in the 2021 NFL Draft. They were previously among the teams rumored to be interested in trading up for either Zach Wilson (BYU) or Justin Fields (Ohio State). Even if Detroit were to stand pat, Trey Lance of North Dakota State could be a possibility.

What does that all mean? A trade-up scenario with the Jets at No. 2 could include Detroit sending one of the two first-round picks it acquired for Stafford. Add in the additional first-rounder and third-round pick it got from Los Angeles, and the Lions would still be well-positioned in their rebuild efforts during the draft. Now, take into account whatever the team might land for Goff, and that’s magnified further.

At the very least, it gives us something to think about as the Lions’ new brass publicly indicates that it is will to move forward with Jared Goff under center.