Derek Carr responds to Joey Bosa comments: ‘He did piss me off’ 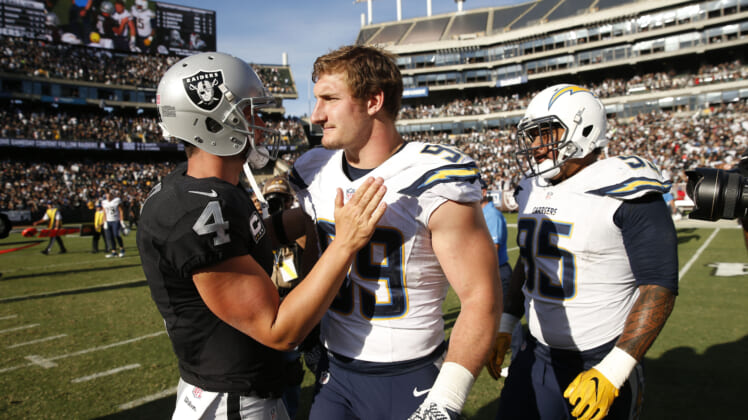 Immediately after the Raiders lost their first game of the season on national television to Los Angeles, Bosa took to the media to call out Las Vegas’ Pro Bowl signal caller.

“We knew once we hit him a few times, he really gets shook,” Bosa said in his post-game presser. “And you saw on (Christian Covington’s) sack, he was pretty much curling into a ball before we even got back there. Great dude, great player. But we know once you get pressure on him, he kind of shuts down.”

During his weekly Wednesday press conference, Carr took time out of his day to fire back at Bosa. He was not mincing words, either.

“I love Joey. He knows that. We’ve gone back and forth [talking crap]. He’s entitled to his opinion. Almost like he watched the game in reverse … we’ll see them again.”

Carr and the Raiders started out slowly in their 28-14 loss to the Chargers. That included putting up all of one first down in the first half.

The three-time Pro Bowler ultimately helped make it a game in the third quarter, leading the Raiders to consecutive touchdowns before the Chargers put it away with a score of their own in the final stanza.

Carr finished the game completing 21-of-34 passes for 196 yards with two touchdowns against one interception. That came on the heels of an historical start to the season in which the Raiders posted a 3-0 record for the first time in two decades.

As for Carr and his feud with Bosa, the two will take on one another to close out the season Week 18 in Las Vegas. That should be fun, especially if both AFC West teams are still in playoff contention.