Denver Broncos training camp is closing in and fans of the team are excited for a new era of football in Denver. Not only was the team sold during the offseason, but they also have a new franchise quarterback that will be calling the plays in 2022.

The acquisition of Seattle Seahawks great Russell Wilson is one of the organization’s biggest moves since trading for Peyton Manning in 2012. That deal led to the team’s last Super Bowl win in 2015 and the hopes for the Wilson era are just as high.

Along with bringing in the Seahawks legend, the team also made a couple of big-money additions to the defense in the signings of Cowboys veteran Randy Gregory and 49ers tackle DJ Jones. The duo is expected to aid in a defense that has top-10 potential in 2022.

Related: Denver Broncos schedule – Predictions and analysis for the 2022 season

Let’s dive into Sportsnaut’s Denver Broncos training camp preview. As we examine everything you need to know from the camp’s location, schedule, and storylines to follow.

For the eighth straight year, the Denver Broncos will base their summer training camp out of the UCHealth Training Center in Dove Valley, Colorado. The team’s camp will begin on July 27 and run through August 11. As many as 14 of the practices will allow fans to be in attendance. You can get the full run down of the training sessions that will be open to the public below. 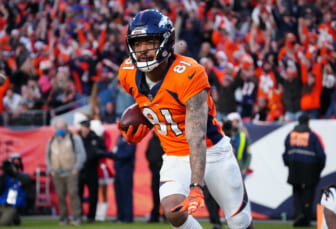 Can fans attend the Broncos training camp this year?

Yes, fans can go and check out the stars of their favorite football team in person this summer. Seating for practices is on a first-come, first-serve basis and begins at 9 AM ET on the day of training. If you do plan on attending one of the 14 public practices, here is a word of advice from the Denver Broncos: “The seating area is on a natural grass surface with a very limited amount of shade, so please bring proper footwear, clothing, and sunscreen.”

Here are the top storylines to follow and position battles to watch during the Broncos 2022 training camp.

Training camp is a key moment for a new head coach. Sure, minicamp in the spring allows them the chance to get familiar with their players, but many of their best don’t attend or on a limited basis. Training camp is when a coach has to lay the hammer down and set an example for what their regime will be like.

It isn’t always well-received but is a necessary part of building a culture. Not to mention, the lead coach must also forge relationships that make veterans and lockerroom leaders buy into what a coach and his staff want to do. There are high expectations for the Broncos in 2022 and Hackett will have to hit the ground running.

Almost every offensive line spot could be up for grabs

Left tackle Garett Bolles is probably the only player with a guaranteed starting spot in 2022. However, after that, every other position on the line could be up for grabs. Last year’s starter Lloyd Cushenberry will look to hold on to the center spot against Quinn Meinerz, rookie Luke Wattenberg, and Graham Glasgow.

Glasgow and Dalton Risner have a leg up at the guard spots, but Netane Muti and Ben Braden will definitely get opportunities to win those jobs. It will be a major story to follow as the team decides who will be the starting squad protecting Wilson. 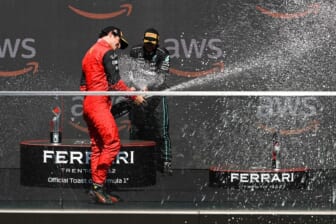 Wilson developing chemistry with his top four receivers Courtland Sutton, Jerry Jeudy, Tim Patrick, and K.J. Hamler will also be a major story in camp. The team’s running back situation isn’t overly strong, so Wilson and the receivers will need to carry a lot of responsibilities next season. The faster they get on the same page the quicker the start the team can have in a tough division.