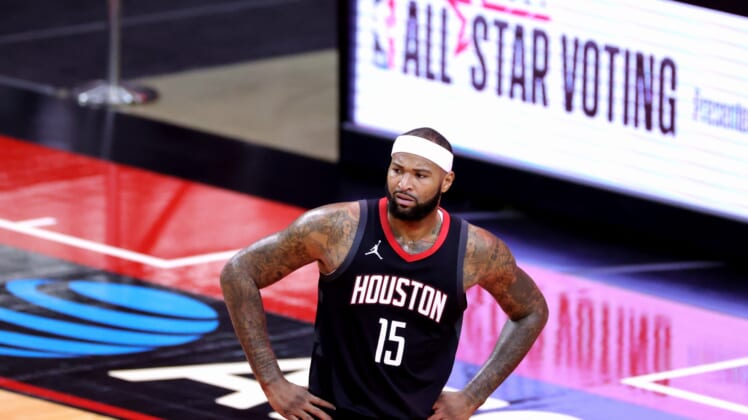 Not long after the Houston Rockets guaranteed DeMarcus Cousins’ contract, both sides are agreeing to part ways as they each look to go in different directions for the remainder of the season.

With the Rockets rebuilding after the James Harden trade, Cousins wants an opportunity to compete for an NBA championship. As a result, Houston is releasing its starting center.

UPDATE: Houston Rockets agree to move on from DeMarcus Cousins

The Athletic’s Shams Charania first reported word that both sides agreed to a mutual separation. The move, which was expected within a matter of days upon the news initially breaking, became official on Tuesday, per Charania:

The Rockets now have greater flexibility in their rotation to deploy smaller lineups for the remainder of the season.

While the decision benefits everyone, it still comes as a surprise. Houston guaranteed the remaining $2.3 million contract Cousins was playing on for the rest of the year. Assuming that still holds, he will now receive that money and can soon sign a contract to join an NBA Finals contender in a matter of days.

The Rockets signed Cousins in November, hoping that the former All-Star center would solidify the center position and possibly convince Harden to stick around. When things didn’t work out, the writing was on the wall regarding Cousins’ long-term future with the team.

He is coming off one of his best games of the season. On Wednesday night against the Philadelphia 76ers, Cousins scored 19 points, blocked two shots, recorded two steals and sunk four three-pointers in 37 minutes. His play of late has been impressive, averaging 11.7 points and 8.2 rebounds per game, shooting 37.5% from beyond the arc this month.

Once he becomes available, it won’t take long for his phone to start ringing. He still has close ties to the Los Angeles Lakers, a team without Anthony Davis for at least the next month. With Marc Gasol providing little outside of his defense, Cousins’ skills would help fill a void in the team’s rotation.

The Brooklyn Nets, Boston Celtics and Toronto Raptors also stand out as potential landing spots. Boston needs a big move and has reportedly been active in trade discussions in the past few weeks.