Deandre Ayton linked to the Minnesota Timberwolves: How it could work 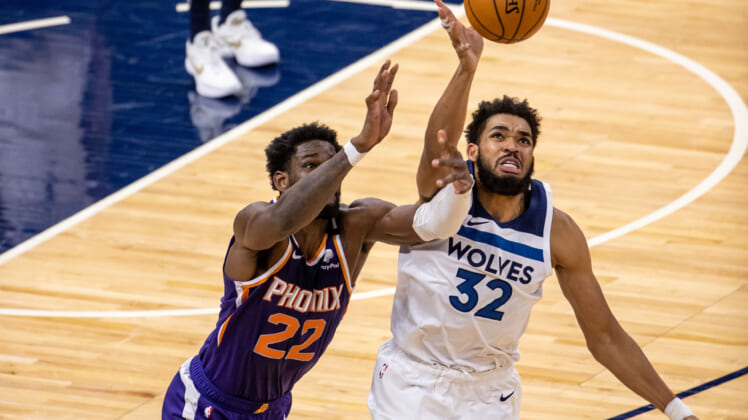 Phoenix Suns star center Deandre Ayton is among the most sought-after NBA free agents of the cycle. Phoenix had pushed back against signing the restricted free agent to a max contract in the past. There doesn’t seem to be any change in that regard with Ayton able to negotiate with other teams.

One team that continues to be bandied about as a potential landing spot for the former No. 1 pick are the Minnesota Timberwolves. On the surface, this wouldn’t seem to be a great fit given the presence of Karl-Anthony Towns in Minneapolis.

However, that’s just on the surface. New Wolves president Tim Connelly seems to be active in trade discussions behind the scenes. According to ESPN’s Brian Windhorst, that could include pulling off a sign-and-trade for Ayton. There’s also a belief that Minnesota could clear enough cap room to sign Deandre Ayton outright. Below, we look at how this could work.

Deandre Ayton as a fit with the Minnesota Timberwolves

Having two bigs in today’s guard and wing driven NBA wouldn’t seem to work. That’s until we realize Ayton and KAT bring different things to the table. The reigning NBA Three-Point Contest winner, Towns has continued to expand his game to the outside. Meanwhile, Ayton is more of a banger in the truest sense of the term.

In particular, Minnesota is looking to find a defensive presence inside. Towns has not been that throughout his career. Ayton has improved in this regard each season he’s been in the NBA since the Suns made the former Arizona standout the No. 1 pick back in 2018.

As you can see, Ayton makes more of an impact on that end of the court. It really isn’t that close. In short, Ayton and Towns would work well together in the frontcourt with stud young guard Anthony Edwards doing his thing outside — creating a new big three in the Twin Cities.

Can the Minnesota Timberwolves pull off a sign-and-trade for Deandre Ayton?

This is where it gets complicated. In terms of the finances, sending D’Angelo Russell’s contract to Phoenix would work in a sign-and-trade. Russell has been on the block for some time now and is owed $31.3 million next season — the final year of his current contract.

That just isn’t a reasonable solution given Phoenix’ star backcourt duo of Chris Paul and Devin Booker. Unless the Suns believe they can flip Russell for another core piece, Russell heading to the desert seems to be a non-starter in any Deandre Ayton sign-and-trade.

Instead, the Wolves would likely have to work out a three-team deal or send Russell packing in a separate trade to create the cap room to sign Ayton outright.

This would require multiple assets to head the other way in order to entice another team to take on Russell’s contract. The likes of the Detroit Pistons, Orlando Magic and Indiana Pacers could potentially take on a bulk of Russell’s deal in a trade. Now in complete rebuild mode, the San Antonio Spurs are seemingly in that same company.