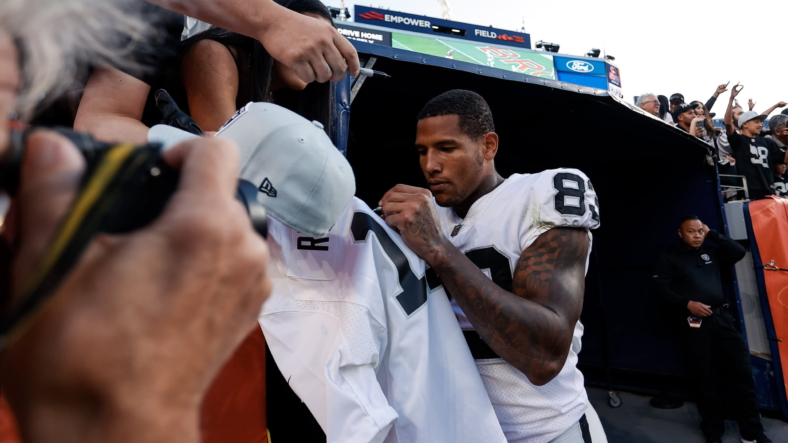 Las Vegas Raiders Pro Bowl tight end Darren Waller just fired his agent over at Klutch Sports as the vastly underpaid star looks for a new contract with his team ahead of Week 1.

This has been part of a larger process in which Waller was largely away from the Raiders’ facility in Henderson during training camp. There’s been no concrete reasoning for his absence. But comon logic suggests that it has to do with the star tight end’s contract.

According to CBS Sports NFL insider Josina Anderson, something could soon come to fruition on this end. Anderson notes that Waller and the Raiders have had discussions on a new deal that would make him the highest-paid tight end in NFL history on a per-year basis. The report notes that $16 million per season could be in the cards.

Darren Waller contract and status as an underpaid entity

Back in October of 2019, Waller inked a four-year, $29.8 million extension with the Raiders. At that point, he was in the midst of a breakout campaign with the team after the former undrafted free agent from Georgia Tech recorded just 18 receptions in his first three NFL seasons — the first two of which came with the Baltimore Ravens.

The Raiders’ former brass decided to reward him on a long-term deal after he tallied 37 receptions for 359 yards in the first five games of the campaign. For Waller and the Raiders, things could not have turned out better. He finished that season with 90 receptions for 1,145 yards before earning Pro Bowl honors in 2020. Simply put, Waller has been among the best receiving tight ends in the NFL over the past three seasons.

At issue here is Waller’s value on an ever-evolving market at the tight end position. He’s the 17th highest-paid player at his position on a per-year basis, behind much less-productive players such as Logan Thomas, Will Dissly and C.J. Uzomah.

NFL tight end contracts and where Darren Waller might fit in

Waller and the Raiders will have to wait until he hires a new agent for something to happen on this front. That can’t happen until at least Wednesday based on NFLPA guidelines. Once he does bring in new representation, we’re talking about a massive deal that will compare to some of the best players at his position in the NFL on a per-year basis.

As productive as any tight end outside of Kittle and Kelce on this list, Waller will rely on continued market inflation to net a record-breaking extension ahead of Week 1 against the Los Angeles Chargers. Here’s how it might look.

That would be a home run for both the tight end and his team.