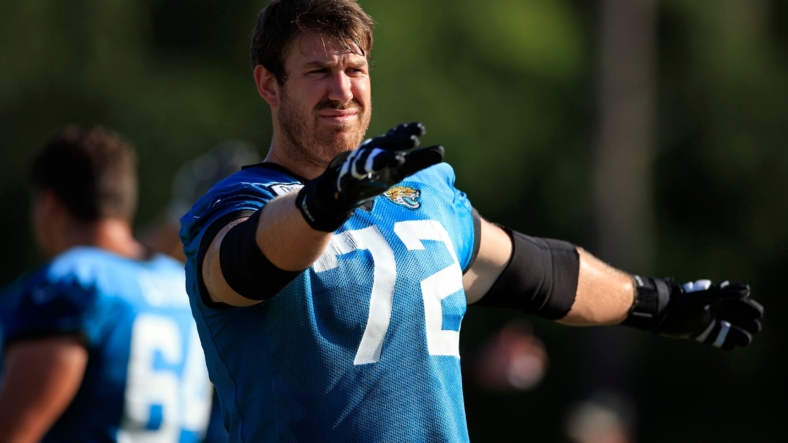 The Dallas Cowboys offensive line suffered a devastating blow before Week 1 with the Tyron Smith injury. As the franchise looks to find a viable replacement at left tackle before the regular season, an intriguing target is emerging for Dallas.

Dallas finds itself in a familiar position right now. Smith missed three games each season from 2017-’19, played in only two games in 2020 and missed five contests last year. However, the difference this season is the Cowboys lack the depth they once had at the position with La’el Collins gone and Terence Steele already starting at right tackle.

While there are a few veteran free-agent options available, the talent level took a massive hit once the New York jets signed Duane Brown. With Andrew Whitworth unlikely to come out of retirement, Jerry Jones and the Cowboys front office must decide between putting 2022 first-round pick Tyler Smith at left tackle or acquiring a replacement via trade.

According to John Shipley of Sports Illustrated, Jacksonville Jaguars left tackle Walker Little is “high” on the Cowboys’ list of potential options to replace Smith. There are no guarantees that Little is even made available, especially since he is competing for the starting spot at right tackle.

However, as Shipley notes, the level of desperation in Dallas could put the Jaguars in a position to take advantage of this situation. If Little can’t beat out Jawaan Taylor for the starting spot, he would become the swing tackle. While it’s a vital role for this team, the opportunity to land a valuable pick could be worthwhile.

Why Walker Little is a fit for the Dallas Cowboys

Many viewed Little as one of the best offensive linemen in college football just a few years ago. However, he suffered a season-ending injury in 2019 and later opted out of the 2020 season due to the COVID-19 pandemic. Despite the risks associated with drafting him in the 2021 NFKL Draft, Jacksonville snagged the 2018 first-team All-Pac 12 selection with the 45th overall pick.

Related: JC Tretter had an interest in Dallas Cowboys, Minnesota Vikings before retiring

Shipley wrote that Little has continued to make a strong impression on the Jaguars’ coaching staff throughout practices this summer and he has played well during the preseason. With NFL experience under his belt and another year of coaching, it’s reasonable to think he could make even more strides as a starter in 2022.

With Robinson signed to a three-year deal worth $54 million, it’s at least possible Jacksonville will consider trade offers if the Cowboys are willing to pay the price for Little. Given the Jaguars are just a year removed from spending a second-round pick on him, the asking price would likely start at a Day 2 pick and could be even higher.