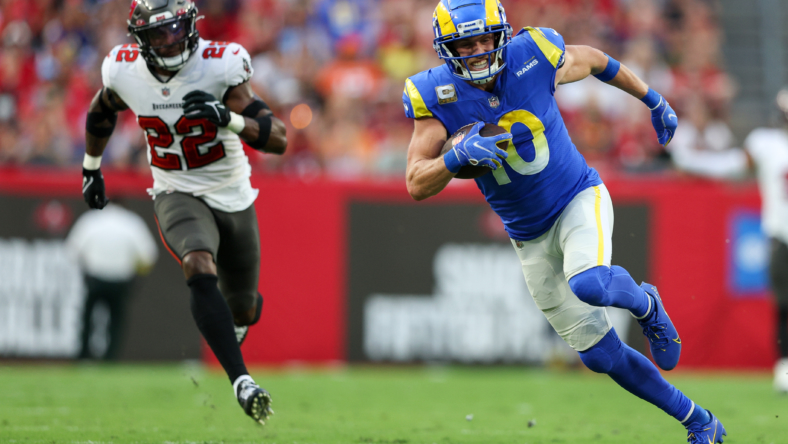 Record-setting Los Angeles Rams wide receiver Cooper Kupp has been pretty much the only bright spot for the defending champs through what has been a disappointing first nine weeks of the season.

It now looks like one of the game’s best pass-catchers will be sidelined for some time. Kupp suffered an ankle injury in Los Angeles’ loss to the division-rival Arizona Cardinals on Sunday.

The injury itself looked pretty darn bad as Cardinals cornerback Marco Wilson rolled up in Kupp’s ankle. Kupp immediately went back to the locker room with trainers and did not return to action.

Initially, the injury seemed to be pretty darn serious.

The Rams did receive some good news after the game as it appeared Kupp did not suffer any structural damage.

Star quarterback Matthew Stafford missed Los Angeles’ loss to Arizona on Sunday. This represented the Rams third consecutive defeat. They are now 3-6 on the season and two games out of the final playoff spot in the NFC.

Los Angeles boasts the 29th-ranked scoring offense in the NFL at 16.4 points per game. That’s north of 10 points per outing fewer than a season ago. And as noted above, Kupp had been the Rams’ only real bright spot after he won both the NFL Offensive Player of the Year and earned the Super Bowl MVP last season.

After recording 145 catches for 1,947 yards a season ago, Kupp was on pace for another extraordinary statistical season. That can now be put on hold for who knows how long. High-ankle sprians are multi-week injuries. They can extend to months depending on the severity of the sprain.