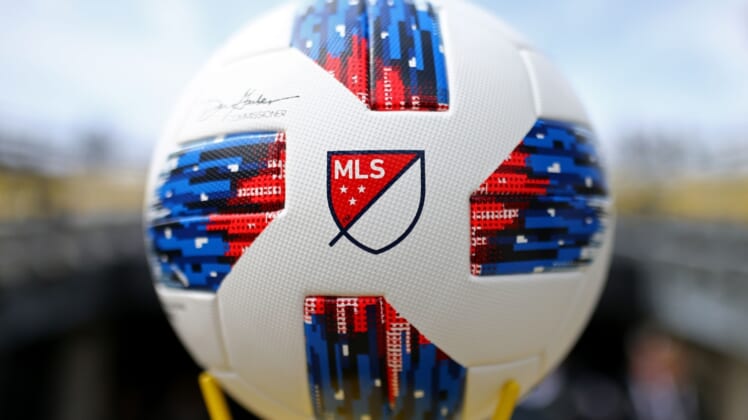 Mar 31, 2018; Columbus, OH, USA; A view of the MLS logo on the official game ball prior to the game of the Vancouver Whitecaps against the Columbus Crew SC at MAPFRE Stadium. Mandatory Credit: Aaron Doster-USA TODAY Sports

Bradley Wright-Phillips scored in the 86th minute as the host Columbus Crew beat Nicaragua’s Real Esteli 1-0 on Thursday to complete a 5-0 aggregate victory in a first-round CONCACAF Champions League series.

The Crew advance to a quarterfinal matchup against either Mexico’s Monterrey or the Dominican Republic’s Atletico Pantoja. Monterrey led 3-0 going into the second leg later Thursday night.

Wright-Phillips dribbled into the box and sent a 12-foot shot into the bottom left corner to secure the Crew’s win on the night. The veteran forward is in his first season with Columbus after playing last season for Los Angeles FC and the prior seven years with the New York Red Bulls.

All five MLS teams advanced out of the first round of the CONCACAF Champions League. In the other quarterfinal matchups, the Portland Timbers will oppose Mexico’s Club America, Atlanta United will face the Philadelphia Union, and Toronto FC will square off with Mexico’s Cruz Azul.