Cleveland Cavaliers open to a Lebron James return but ‘on their terms,’ says NBA insider

As unlikely as it may seem, one Cleveland Cavaliers beat writer believes the organization wouldn’t be against Lebron James returning to his home state team for a third run, but it would have to be under a far different scenario than his last two tenures.

The Cavaliers and James have a long history with some amazing highs and dark lows. the 37-year-old was taken by his home state team with the first overall pick in the 2003 NBA draft, and it began his and the teams meteoric rise to prominence. After seven seasons and one trip to the NBA finals, the young superstar memorably left the team to pursue better championship possibilities with the Miami Heat.

However, he returned four years later to begin a second run that saw the franchise reach the NBA finals four straight seasons and win the organization’s first championship in 2015-2016. But all good things come to an end — especially when it comes to James and the Cavaliers — and he once again took his talents elsewhere, this time to Los Angeles. Unlike James’ first departure, the Cavaliers have done a far better job of rebuilding their team, and after trading for All-Star Donovan Mitchell last week, they are now viewed as at least a top five team in the Eastern Conference.

With the belief that the organization can be a contender for years to come, Cavs beat writer Chris Fedor was asked on a Monday edition of the “The HoopsHype Podcast with Michael Scotto” if Cleveland would be open to a third run with James to help win another championship. Assuming he were to opt out of his Lakers contract for the 2024-2025 season. And while Fedor completely believes Cleveland would not be against the idea, it would only happen if James was willing to be a part of a winning team instead of the center of the organization again. 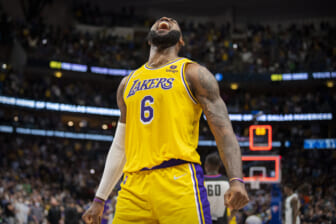 James has made it clear that he wants to play with his son Bronny if he were to land with an NBA team in a couple of seasons. Drafting the child of the NBA legend and getting James to play on a team friendly deal would certainly be one easy way to bring “The King” back into the fold.