The Cleveland Cavaliers have bolstered their frontcourt in a big way this offseason, and that initiative continued Friday when they acquired Lauri Markkanen from the Chicago Bulls in a sign-and-trade deal.

Markkanen was a restricted free agent exits the Windy City after a flurry of Bulls personnel moves.

Chicago was the most aggressive team during the summer, upgrading its roster with Lonzo Ball, DeMar DeRozan and Alex Caruso. While Markkanen was pricing himself out of the Bulls’ range, they were proactive in making sure they had a solid core around emerging superstar Zach LaVine to contend for the playoffs in 2021-22.

But while the Blazers got marginally deeper by adding Nance to their rotation, the Cavs’ end of this deal is the most fascinating because of their commitment to Markkanen that other teams balked at.

This trade could be a sign of more moves to come for Cleveland, too.

It’s no secret Kevin Love wants out of Cleveland, and who could blame him? He signed up to join Kyrie Irving and LeBron James. Yes, he won a championship, but the organization has flailed since LeBron left, and Love has been stuck on losing squads.

The Cavs re-upped with center Jarrett Allen in free agency, and drafted USC big man Evan Mobley No. 3 overall in the 2021 NBA Draft. Adding Markkanen to the mix makes for a compelling trio on paper to say the least.

Mobley’s incredible skill set and ability to create off the dribble make him malleable to fit any rotation. He could be a massive-sized 3 in certain lineups and essentially function as a point forward, with Markkanen playing his classic stretch 4 role and Allen occupying the 5.

Even though Markkanen isn’t the greatest defender, Mobley has the skill set to guard all five positions, and Allen is among the best, most underrated interior paint protectors in the NBA. They’d more than make up for Markkanen’s shortcomings on that end if all three are on the court at the same time. 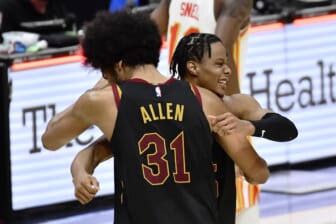 Imagine the likes of Markkanen, Mobley and Allen sharing the floor. Three players who are essentially 7-footers (Allen is listed at 6-foot-11). Combine that group with the Cavs’ strong trio of guards in Ricky Rubio, Collin Sexton and Darius Garland, and suddenly, this team looks a lot better than it has in recent years.

Cleveland needed some size and outside shooting to help space the floor, which Markkanen provides in spades. He’s a better basketball fit with Allen or Mobley than Love is, because his role is more clearly defined.

Markkanen is coming off a career shooting year from the field and 3-point range, yet also averaged his lowest minute total at only 25.8 per contest. He figures to be a solid sixth man for the Cavs, and having only turned 24 in May, Markkanen’s best basketball is probably still ahead of him.