Cleveland Browns quarterback Baker Mayfield (6) fumbles the ball as he is brought down by Arizona Cardinals defensive end J.J. Watt (99) during the second half of an NFL football game at FirstEnergy Stadium, Sunday, Oct. 17, 2021, in Cleveland, Ohio. [Jeff Lange/Beacon Journal]Browns 5

Cleveland Browns quarterback Baker Mayfield said the labrum of his left, non-throwing shoulder is “completely torn,” but he still plans to play Thursday when the Browns host the Denver Broncos.

While he reportedly is seeking a second opinion on the results of an MRI, he said he will be on the field as long as he’s able to be. ESPN reported Tuesday that the Browns don’t think the injury is season ending or will need surgery right away.

“Only I know how my body feels,” Mayfield told reporters Tuesday before practice, adding it was still to be determined whether he’d take part. “And if anyone questions whether I’m hurting the team by going out there, that’s not right. It’s my decision. I get to say whether I am able to play or not.” 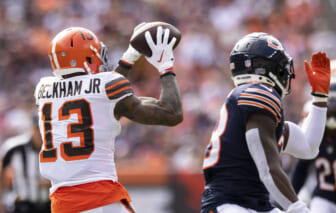 He did not take part in Monday’s practice.

Mayfield played all but four snaps of Sunday’s 37-14 loss to the Arizona Cardinals. He completed 19 of 28 passes for 234 yards with two touchdowns and an interception.

The Browns, a team with preseason Super Bowl aspirations, enter Thursday night’s game with a 3-3 mark and a number of injuries.