While Cleveland Browns fans hope for a speedy recovery and quick return to the field for defense star Myles Garrett, following a serious car accident earlier this week, a new report claims the 26-year-old has a long history of very questionable driving habits.

On Tuesday, came the news that two-time All-Pro Myles Garrett allegedly swerved to avoid an animal on the road and ended up in a major car accident that included his car flipping over several times. While the talented pass rusher did avoid serious injuries, he still suffered a “shoulder sprain, biceps strain, minor lacerations as well as some bumps and bruises to various other body parts.” Without a doubt, good news considering the severity of the afternoon crash in his 2021 Porche.

However, while the cause of his accident is still under investigation by local authorities in Medina County, Ohio, Garrett actually has a well-documented history of driving recklessly.

On Wednesday, WKYC.com reported that court records show the Browns star has been stopped for speeding in at least six instances over the last five years. Several times he was given tickets for exceeding 100 MPH and even incurred two different tickets in a 24-hour period — including one for driving as fast as 120 MPH.

The 24-hour period where Garrett was hit with two speeding tickets just happened last year. Garrett was speeding well over the posted limit of 70 MPH in both instances and was penalized with fines that totaled close to $600.

Garrett’s history of speeding is consistent and has become a yearly occurrence. Beyond Tuesday’s accident — which local officials have ruled that he was driving at “unsafe speeds” once again — and the infractions last year, the top overall pick in the 2017 NFL Draft was also ticketed in 2020 for driving 100 MPH in a 65 MPH zone on Interstate 77 in Akron County. Then again in 2019 for driving 30 MPH over the limit on Fulton Road in Cleveland. Not to mention, in 2018, North Olmsted police also stopped Garrett for speeding and a taillight violation.

In the same year, he was also stopped and fined for several other infractions, including operating a vehicle with a faulty muffler. 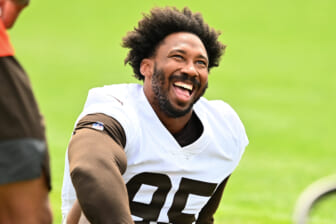 As of now, it is unclear if Garrett will suit up for the Cleveland Browns on Sunday in their Week 4 matchup against the Atlanta Falcons.