They entered the year seen as Super Bowl contenders. Now, they’re finishing their season at .500 at best. To say the Cleveland Browns have been a disappointment in 2021 would be an understatement.

One could point the blame in a number of areas, but typically the three biggest factors are the team’s general manager, head coach, and starting quarterback. As mentioned, the Browns were expected to go on a long playoff run, so let’s cross the general manager off the list.

Who does that leave? Well, 2020 Coach of the Year Kevin Stefanski and 2018 No. 1 overall pick Baker Mayfield.

How does the team respond this offseason? 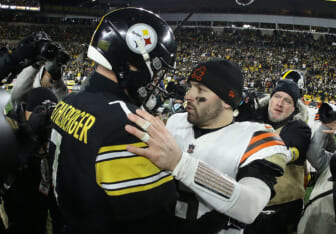 Also Read:
Baker Mayfield could have just played his final game with the Cleveland Browns

Mary Kay Cabot of the Cleveland Plain Dealer suggests Mayfield could be the one who wants out. She goes on to mention “if Mayfield doesn’t get reassurances that things will change next season, he’ll consider asking to be traded”.

It’s a bold claim hidden within her article about solving personal differences between Stefanski and Mayfield, but it also makes some sense. She dives into Mayfield’s comments over the course of the year, publicly calling out the team’s play-calling.

“This is the NFL,” he said. “You have to be able to adapt mid-game and we didn’t do a good enough job as you could tell.” 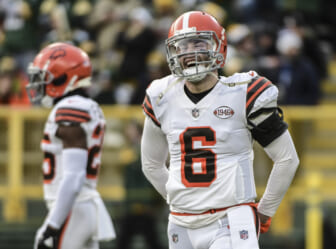 Could the Cleveland Browns trade Mayfield?

Moving on from Mayfield this offseason is tough. Obviously, his value is lower than it’s ever been. Coming off his worst season in which he battled through a torn shoulder labrum, Mayfield can do much better.

Yet, the Browns also know they can do much better than Mayfield at QB. If they truly envision getting to the Super Bowl next season, it’s hard to picture Mayfield being under center. In that case, maybe it’s better to get ahead and just rip the band-aid right off in one motion, good or bad.

It sets up an intriguing offseason in Cleveland. Do they ultimately decide to shop Mayfield as they bring in a new franchise quarterback? Do they hold onto their former No. 1 pick in the hopes he can turn his career around once healthy?

Whatever’s been occurring with the Cleveland Browns, it’s not hard to see the dysfunction within the team. It’s not as bad as their days before selecting Mayfield, but they also don’t appear anything close to being a Super Bowl contender.

Or, do they go in a completely unexpected direction and move on from coach Stefanski?

Maybe he’d even prefer to go back to Minnesota if Mike Zimmer gets fired. Stefanski spent 14 seasons in Minnesota working his way up the ladder. It’s possible Vikings ownership would prefer to pivot from Zimmer to another familiar friend in Stefanski. In this case, the Browns would likely seek trade compensation instead of Stefanski resigning from his position. 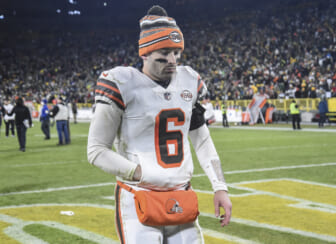