Ball, a restricted free agent, is one of the most talented players available this summer. However, due to his contract situation, the New Orleans Pelicans are allowed to match any offer he receives from another team. But with New Orleans narrowing its sights on players like Lowry and Spencer Dinwiddie, there is an opportunity for the Bulls to strike.

Yahoo Sports’ Chris Haynes reported on NBA TV that, barring an unexpected issue, Ball intends to sign a contract with the Bulls in the coming days. Furthermore, per Bleacher Report’s Jake Fischer, there’s belief a deal could for $80-plus million across four seasons.

There’s a scenario where the Bulls could sign Ball without fearing the offers is matched by New Orleans. If the Pelicans renounce their contractual rights to the 23-year-old guard, which would create more cap space to sign Lowry, Chicago is free to sign Ball immediately. 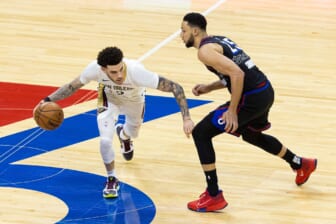 But the latest NBA rumors suggest Lowry is set to join the Miami Heat, immediately taking away the Pelicans’ top free-agent target and eliminating their incentive to renounce their rights to Ball. So, it’s very likely that Chicago will need to make an offer with the risk that the Pelicans match it.

If the offer is structured in the right way, which Chicago is incentivized to do, there’s a greater possibility the Pelicans either don’t match it or agree to a sign-and-trade.

How Lonzo Ball fits the Bulls

After sacrificing significant talent and draft capital to acquire Nikola Vucevic, the Bulls are determined to become a playoff team. Zach LaVine is eligible for free agency next summer and needs to be convinced to stay in Chicago. Adding a complementary point guard would go a long way in building a strong core.

Ball displayed strong playmaking abilities in New Orleans, helping feed passes into the post for Zion William to score immediately or finding Brandon Ingram for the open shot. While Vucevic and LaVine aren’t comparable players to Ball’s former teammates, they would benefit greatly from the same influence he had on the Pelicans.

Not only would Chicago benefit from his skills as a distributor, it could also use his perimeter shooting and defense. Ball shot a career-high 37.8 percent from beyond the arc this past season, averaging 3.1 3-pointers made per game. He also posted a 1.7 Defensive Win Shares and had a respectable 113 Defensive Rating (Coby White, 115).

While paying Ball $20-plus million per season might seem expensive, it could be a worthy investment for a franchise that is desperate to win now and is willing to bet on young talent.