Oklahoma City Thunder fans took a major hit to their 2022-2023 hopes with the Chet Holmgren injury news this week. But a new diagnosis on his Lisfranc injury suggests it could be a problem for Holmgren and the Thunder that last well last well past next winter.

The Thunder had a lot of reason to be optimistic about their chances to reach the NBA playoffs next season. They already have a solid core of young talent in Shai Gilgeouos-Alexander, Georgios Kalaitzaki, and Luguentz Dort. But in the 2022 NBA draft, the team added highly touted prospect Chet Holmgren to their young and talented roster. However, that all changed on Thursday when it was revealed that the second overall pick in June had torn a ligament in his foot during a pro-am game and would miss the entire season.

Modern medicine is a pretty amazing thing, and we have seen world-class athletes return to elite form after serious injuries. Nets superstar Kevin Durant tore his Achilles and is back to being one of the best players on the planet. Mets ace Jacob DeGrom had Tommy John surgery in the minor leagues and went on to be arguably the best pitcher of the last decade. Yet, there are also those that have never been the same after going under the knife to repair major injuries. And one sports medicine expert believes Holmgren has a very long road ahead if he hopes to reach his lottery pick potential consistently in the future.

On Friday, The Athletic’s injury expert Virginia Zakas took a deep dive into what a Lisfranc injury is, how Holmgren suffered the trauma, and what is the long-term recovery prognosis. Based on her breakdown, it seems like the Gonzaga star and the Thunder medical staff have a very long journey ahead of them. And Oklahoma City fans will need to have realistic expectations about what they will get out of Holmgren in 2023, and if he will ever reach the promise of being a second overall draft selection. 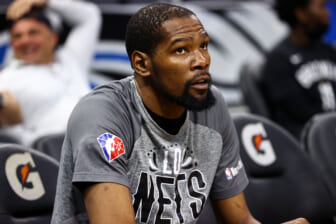 This has to be worrisome news for Thunder fans. Because of his youth, Holmgren has a better chance of a full recovery compared to veteran players with more physical wear and tear on their bodies. However, the idea of changing his mechanics, and how long that process can take, surely makes it seem like his becoming an impact player in the NBA will take many more years than originally expected.