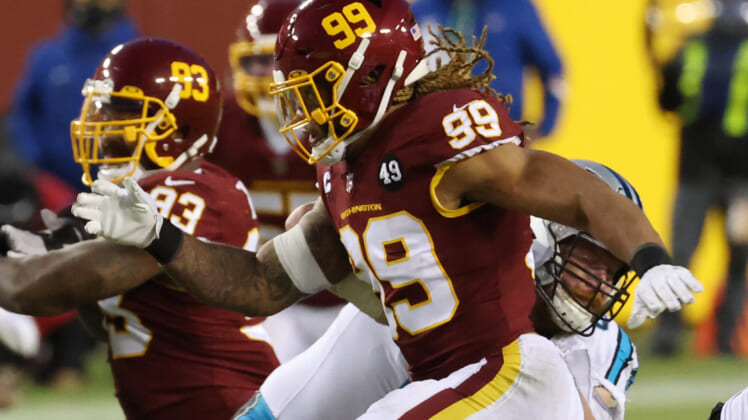 Washington Commanders edge rusher Chase Young tore his ACL on Nov. 14, 2021, a devastating injury that sidelined him for the remainder of the season and cost him time to improve his game in the offseason. Unfortunately, it might also sideline Young early this fall.

Recovery timelines for ACL injuries can vary widely, typically ranging from 9-12 months. While running back Adrian Peterson made a remarkable recovery, tearing his ACL on Dec. 24 and playing in Week 1 the following year, others aren’t so lucky.

Green Bay Packers left tackle David Bakhtiari is the latest example. He underwent ACL surgery in January 2021, with the team hoping he could return midway through the season. He briefly played in the final regular-season game against the Detroit Lions, but experienced a setback and is now questionable for 2022 training camp.

It’s why the Commanders aren’t providing a specific timetable for Young’s return. Selected with the No. 2 pick in the 2020 NFL Draft, Washington isn’t going to do anything to jeopardize the long-term health and ability of one of its most important players.

Young will not be on the field when training camp begins, instead, continuing his rehabilitation. He’ll be placed on the Physically Unable to Perform list. It’s a procedural move for the team, but it might not be the only decision they have to make.

According to John Keim of ESPN, it remains possible that Young will open the 2022 season on injured reserve. While it’s a potential outcome the organization doesn’t want to address right now, the timeline for the 6-foot-5 edge rusher’s recovery might make it necessary.

Putting Young on injured reserve before Week 1 buys him additional time. Required to miss the first four games of the 2022 NFL season, Washington wouldn’t see one of its best players until the second week of October.

The Commanders’ schedule plays an important role in all of this. If Young can return for a Week 5 matchup against the Titans, there would be a Thursday Night Football game days later. It’s possible the medical staff might not feel entirely comfortable having Young’s first and second games back be played just four days apart.

It’s why a return after Week 6 shouldn’t be ruled out. Buying him additional time might offer the organization more confidence that Young can play without any limitations or hesitancy on the surgically-repaired knee. While fans want him back as soon as possible, the team is going to take a long-term approach to the decision.