The Buffalo Bills are one of the best teams in the NFL and have a legitimate shot at winning the Super Bowl this season. With so much on the line, the Bills will be determined to avoid any roadblocks that could cause problems this fall.

To avoid some of the challenges caused by the COVID-19 pandemic, the NFL created different rules this season for teams that have at least an 85% vaccination rate on their roster. If a team clears the threshold, it will return to the relaxed safety protocols that allow team employees to move around more freely during the season.

For NFL cubs that fall short, they will be subject to many of the same strict policies we saw last season. It puts them at a competitive disadvantage, which is a big reason why Bills general manager Brandon Beane said a player’s vaccination status could determine his spot on the roster.

“It’s possible Beasley saves the Bills the trouble if he follows through on his retirement threat because of the NFL’s Covid-19 protocols for unvaccinated individuals, but the Bills could remove the potential distraction themselves. That’s unlikely – again, these are supposed to be “surprise” candidates – but it shouldn’t be entirely ruled out. If Beasley were to be released, he’d save the Bills $5.341 million against the 2021 cap.”

Beasley has spoken out strongly against the NFL’s COVID guidelines. Believing the league is coercing players into getting the vaccine for COVID-19, Beasley has threatened retirement to preserve his freedoms.

However, Beasley didn’t exercise the player opt-out clause that would have allowed him to sit out the entire 2021 season and still receive a portion of his salary. He vowed to never speak about it after but indications from coach Sean McDermott don’t suggest retirement is imminent. 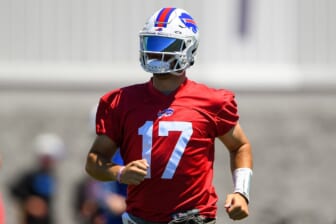 In a perfect world, the Bills would love to have Beasley on the field. He finished second on the team in receptions (82), fourth in touchdowns (four) and set a career-high in receiving yards (967). The 5-foot-8 slot receiver was a trusted weapon for Josh Allen, who also questioned the vaccine, and played through a broken bone in his leg during the NFL Playoffs.

The Buffalo Bills don’t necessarily need the cap space that would be created by cutting Beasley. However, removing him from the roster and replacing him with a vaccinated player would be another step toward the 85% threshold. Reaching that mark not only gives Buffalo a competitive advantage, it also reduces the risk of a small COVID outbreak.

Ultimately, it would still be surprising if Beasley isn’t on the field for the Bills in Week 1. But it’s safe to say the franchise would greatly prefer he helped work towards the goal rather than creating new problems.