Tampa Bay Buccaneers quarterback Tom Brady and tight end Rob Gronkowski were looking forward to Sunday's shot at revenge against the New England Patriots. Unfortunately, Gronk won't play in Week 4 and could be looking at an extended absence.

Gronkowski, one of the Buccaneers' leading offensive weapons this season, took a hit to the ribs in Week 3 against the Los Angeles Rams. While he would later return to the game, further tests revealed the injury severity was worse than expected.

According to NFL Network's Ian Rapoport, a CT scan and MRI determined that Gronkowski suffered two hairline fractures to his ribs. He didn't make the trip to New England and there is doubt about his availability for Week 5. 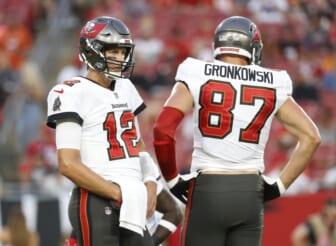 Through three games this season, Gronkowski has been a go-to target for Brady. The legendary duo has connected 16 times for 184 receiving yards and four touchdowns. With Brady set to pass the NFL's all-time passing yards record on Sunday Night Football, many hoped the historic throw went to Gronk.

Instead, Brady will look to spread the ball around to one of the best receiving corps in the NFL. Antonio Brown is returning after missing Week 3 with COVID-19. If Brown is covered, Brady can target Pro Bowl wide receivers Mike Evans and Chris Godwin.

Tampa Bay is a heavy favorite to beat the Patriots at Gillette Stadium. While Gronkowski won't be part of the special day, his best friend and teammate might get enough revenge on Belichick for the both of them.