It has been a frustrating few weeks in the relationship between Samuel and the 49ers. All was quiet following the team’s NFC Conference Championship loss to the Los Angeles Rams in January. However, things changed quickly by early April when the rumblings started of the 26-year-old’s frustration with his current contract situation.

Deebo Samuel is set to make just under $4 million in the final year of his rookie contract in 2022. That seems to be a problem for the three-year veteran and he scrubbed mentions of the team from his social accounts earlier this month. Suggested in a post comment that he was looking for a new long-term deal in the range of $25 million per year, and then when the course didn’t change in that direction the All-Pro wideout asked the team for a trade last week.

San Francisco 49ers should pay Deebo Samuel ‘what he wants’

While the team would surely like to keep their best player on offense, and general manager John Lynch recently admitted he couldn’t imagine such a moment coming to pass, moving the unhappy talent is very possible. Especially if holding on to him without a new deal being made would lead to losing him for nothing in free agency next year.

While Samuel reportedly wants out of San Francisco, one person that believes he needs to rethink that train of thought is former three-time Pro Bowler Dez Bryant. The long-time Dallas Cowboys player believes the 49ers should, “go ahead and pay him because he deserves it.” However, he also feels Samuel should not overlook how good of a fit he is for 49ers head coach Kyle Shanahan and his offense.

“If we strictly talking about football, I think the 49ers is a great place for him. Kyle Shanahan, he is a genius. He knows how to get you the ball. And, a lot of organizations don’t know how to do that,” Bryant told TMZ Sports on Thursday. 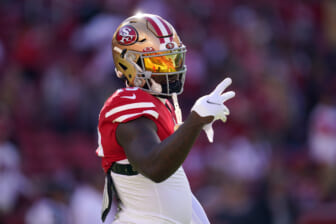 It is a fair point after Samuel not only had 77 catches in 2021 but also had 59 attempts. The team does use him in a unique way that is unlikely to happen with another team. However, it is unclear if more money is a higher priority than offensive productivity for the 26-year-old first-time Pro Bowler.