Even though all signs point to a great deal of change coming for the Brooklyn Nets heading into next season, it seems the team would very much prefer to keep their squad intact and see Kevin Durant and Kyrie Irving return for the 2022-2023 season.

After the start of NBA free agency delivered very few surprises, the focus has shifted to what the Nets will do with their top two stars. Durant officially requested a trade earlier this month and became the biggest prize the trade market has maybe ever seen. Before that, unproductive contract negotiations seemed to create a schism between the organization and Kyrie Irving where his exodus seemed an eventuality.

They are two of the best scorers on the planet with a value that should put Brooklyn in a strong place to rebuild their franchise quickly with young stars and tons of draft assets. However, while it seems the relationship between the two stars and the organization is irreparable, a new report claims the Nets actually hope to trade neither and bring back the same team next season.

On a Friday edition of Jake Fischer’s “Please Don’t Aggregate This” podcast, the Bleacher Report NBA insider explained his belief that the team wants both players in Brooklyn next season, even if they actually get a trade offer for Durant that meets their very high asking price.

While the Phoenix Suns are reportedly Durant’s preferred landing spot, other news has claimed they have not even come close to the Nets’ asking price. The Miami Heat could be another suitor for the 12-time All-Star but they are currently hunting for more draft assets to add in a possible deal. 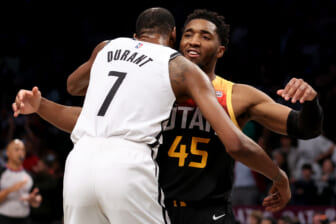 As for Irving, the Los Angeles Lakers seem to be the only team interested in trading for him, or rather, Lebron James desires a reunion while the team’s front office has other targets in mind.