Brooklyn Nets players were "surprised" as some expected Kyrie Irving to return from his suspension against the Sacramento Kings. 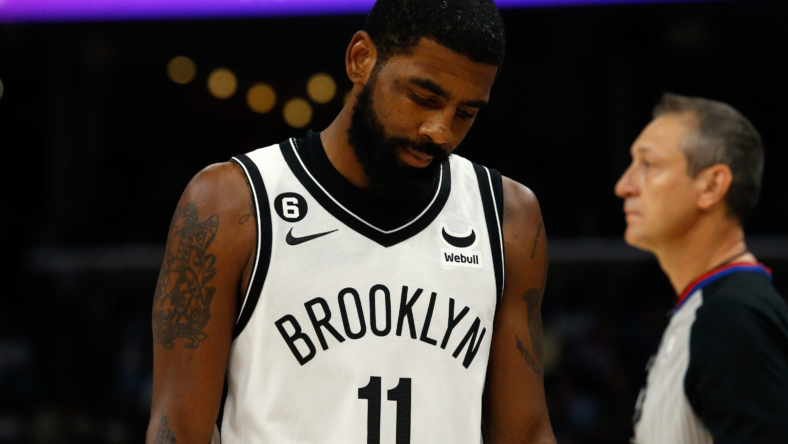 The Brooklyn Nets are coming off an embarrassing 153-121 loss against the Sacramento Kings on Tuesday night that has brought them to a 6-9 record. Alongside the loss, there has been plenty of drama in Brooklyn.

Nets forward Ben Simmons has been a major topic after Brooklyn has been growing more and more frustrated with him while coaches and players question his availability, level of play, and passion for basketball.

Meanwhile, Kevin Durant sat down with Bleacher Report for an exclusive interview as he discussed his trade request from the organization this offseason and more. However, the drama does not stop with Simmons and Durant.

The loss itself was embarrassing enough but Brooklyn has been in the headlines for all of the wrong reasons. One of them includes Kyrie Irving being suspended due to his promotion of an antisemitic film on social media.

While Irving has been serving his suspension and working through the process, some Nets players were reportedly surprised he did not return Tuesday night against the kings, according to TNT’s Jared Greenberg.

“It’s unclear at this point when (Kyrie Irving) will return from suspension or exactly what requirements need to be met to get him back at the court. Some Nets tell me they’re surprised. They thought he would be active tonight. Markieff Morris telling me this morning at shootaround he doesn’t understand why Kyrie’s not back yet.”

The players do not make the decisions but it certainly appears they are ready to see Irving back on the floor. Based on Greenberg’s comments, there is no timeline for when the point guard may return to the court.

However, Brooklyn forward Markieff Morris seems to be at least one Nets player who does not understand why Irving is not back yet. Perhaps, the 30-year-old has not met the requirements as of now.

Either way, it is clear that Brooklyn will be a better basketball team when Irving returns to the court. The most important factor remains Irving’s actions and they need to be dealt with before he plays basketball again.

Irving has missed the last seven games due to his suspension and there are no signs that it could end soon.