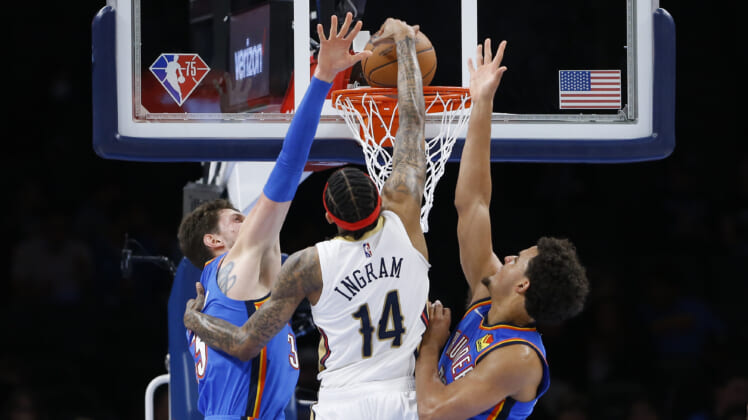 Sitting at the bottom of the NBA standings with Zion Williamson out Indefinitely, the New Orleans Pelicans could face a pivotal decision. With the NBA trade rumor mill heating up, could Brandon Ingram be on the move?

The 24-year-old is one of the best frontcourt scorers in the NBA. A go-to scoring option and the team’s leading source of offense for the better part of the last three seasons, this is someone the Pelicans could get a considerable haul for in a trade.

Plot twist: the Pacers continue to shop their starters but in doing so trade for Ingram.

Yes, the Pacers are supposedly shopping Domantas Sabonis, Myles Turner and Caris LeVert. That said, they fired Nate Bjorkgren after one season in favor of Rick Carlisle, who likely didn’t sign up for a rebuild. Perhaps the Pacers could be buyers and sellers at the same time? For instance, they trade for Ingram while getting fair value for Sabonis and Turner. 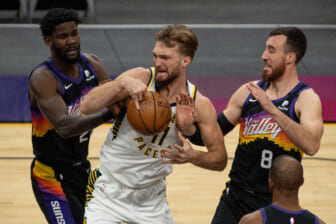 Also Read:
How a Domantas Sabonis trade to the Phoenix Suns might look

In total, they could get at least three compelling young players and as many as four future first-rounders for the two big men. At the end of the day, they leave the trade deadline with more future picks while acquiring a bit of an upgrade in the scoring department by going from LeVert to Ingram. As for Ingram’s arrival, he and Malcolm Brogdon become the co-anchors of the Pacers’ offense and are surrounded by eventual lottery selections.

The Pacers are the 13th seed in the Eastern Conference. This roster shakeup could lead to them improving in the short term while creating more upside in the long run. From the Pelicans’ perspective, they get a talented scorer in the 27-year-old LeVert and a pair of future picks. There’s little uncertainty in this move for them considering LeVert’s skill set.

All that said, the Pacers may prefer to individually trade their tenured players for youth and draft picks.

From playing in the Eastern Conference Finals to becoming a monotonous .500 team, it’s been a rough 15 months for the Boston Celtics. In an attempt to break through this yawning stretch, Boston makes a bold move for Ingram.

The immediate result is the Celtics becoming a forward-oriented team, as Ingram, Jayson Tatum and Jaylen Brown are all reliable and highly productive scorers. From a sheer talent standpoint, this would be one of the elite scoring trios in the sport. All of a sudden, the game becomes easier for players around them like Marcus Smart, Josh Richardson, Robert Williams III and Romeo Langford.

Boston kept most of its lottery picks acquired in trades from the middle portion of the last decade, including Langford and Nesmith. None of them have a substantial role in the Celtics’ rotation. One of the worst things a contender can do is waste their draft capital. Acquiring Ingram is the Celtics’ attempt to right their wrongs of the past, making at least one more run with Tatum and Brown.

The three All-Star-caliber scorers on the floor at the same time inhibit teams from focusing too much on any particular player given their respective ability to score 30 points on any given night. If this group jells, the Celtics could be a contender in the Eastern Conference once again.

From New Orleans’ perspective, they get a handful of talented youngsters who would help spark a new rebuilding effort. The factor that could stop Ingram from going to Boston, however, is them preferring to acquire a player who would be a better fit in their rotation, as opposed to taking a chance on Ingram being the answer.

The Thunder can make any trade they want. Seriously, they have the draft pick and youth ammunition to make a pair of blockbuster trades. General manager Sam Presti can begin deploying his asset army by acquiring a would-be vital piece to the equation in Ingram.

Shai Gilgeous-Alexander is a star. He and Ingram would feed off each other given both players’ ability to score off the dribble and from the perimeter. In the wake of this trade, head coach Mark Daigneault would still have a plethora of developing young players across the board (Josh Giddey, Darius Bazley, Tre Mann) who would complement the team’s new one-two scoring punch.

At some point, NBA teams have to cash in on their array of draft picks. Oklahoma City needs to begin doing as such. Their upcoming draft picks have little, if any significance to the team’s future, as the Thunder already have a roster that’s primarily made up of draft picks. They also have three combined first-round selections in the 2022 NBA Draft. In the scenario they fall in love with a player in the draft, they can trade up.

While a competitive team, the Thunder need more star power. No matter the individual bright spots and overall competitive play, they still find themselves being the 15th seed in the West. Progress isn’t just young players putting up top-tier numbers: it’s winning games and at least competing for the playoffs. Ingram would be a phenomenal starting point for the Thunder.

Plus, some other high-profile players will inevitably become available via trade. Oklahoma City could acquire Ingram and then trade for someone like Karl-Anthony Towns or CJ McCollum in the offseason. They’d go from being a deeply entrenched rebuilding team to a dark horse threat in the West. Ingram fits the bill for Oklahoma City. Meanwhile, the Pelicans get draft picks and a trio of young players with varying skill sets.