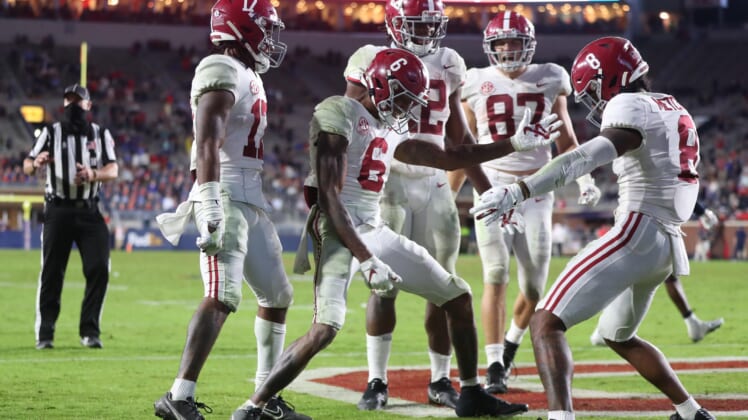 Now that previous Cincinnati Bengals rumors relating to the demise of head coach Zac Taylor have given in to the reality of him returning for a third season, the focus turns to free agency and the upcoming 2021 NFL Draft.

Cincinnati is slated to pick fifth overall after winning two of their past three regular-season games. The team boasts a franchise quarterback in that of Joe Burrow who is expected to be ready in Week 1 after suffering a torn ACL as a rookie.

Outside of that, there’s a whole lot of moving parts for general manager Mike Brown. Below, we take a look at three options for the Bengals with the No. 5 pick in the 2021 NFL Draft.

By now, it’s readily apparent that longtime Bengals receiver A.J. Green will be moving on in free agency. A seven-time Pro Bowler earlier in his career with the Bengals, the 32-year-old Green has fallen on hard times recently. He recorded a mere 47 catches for 523 yards in 16 games this past season.

Cincinnati does boast a talented young pass-catcher in that of 2020 second-round pick Tee Higgins. He awed onlookers as a rookie by recording 67 receptions for 908 yards and six touchdowns while hauling in 62% of his targets. An underrated Tyler Boyd (79 receptions, 841 yards) will also be returning.

With that said, it would not be a surprise if Bengals rumors leading up to the draft surround the possibility that they’ll add the top receiver in the class to help Burrow moving forward. LSU’s Ja’Marr Chase as well as the Alabama duo of reigning Heisman winner DeVonta Smith and Jaylen Waddle are options here. From a pure fit standpoint, Chase would make the most sense given his relationship with Burrow.

Will Bengals rumors of a trade down come to fruition?

Having posted a 6-25-1 record in Zac Taylor’s first two seasons as their head coach, it’s obvious that these Bengals are more than one player away from becoming relevant on the broader NFL stage. They need multiple upgrades in order to even be taken seriously in the ultra-competitive AFC North.

That’s where a potential trade down comes into play. If one of the top-three quarterbacks were still on the board at five, Cincinnati would have a lot of teams calling up about a potential trade. At this point, there’s a chance either Zach Wilson (BYU) or Justin Fields (Ohio State) will be available.

We’re not talking about a blockbuster trade that would prevent Cincinnati from acquiring a top-10 talent. Rather, moving down with the Lions at seven or Panthers at eight could net the Bengals an additional second-round pick and change. They’d still be able to go wide receiver with one of the three pass catchers mentioned above or add a high-upside receiving target for Burrow in that of tight end Kyle Pitts.

This past season saw Cincinnati yield nearly 27 points per game. Opposing quarterbacks tallied 32 touchdowns against 11 interceptions against this unit. Free-agent acquisition, cornerback Trae Waynes, missed the entire season to injury. There’s an obvious need at all three levels on defense in Cincinnati heading into the offseason.

That might actually be a good thing for Mike Brown and Co. If the Bengals were to go defense, their options would not be limited. Penn State linebacker Micah Parsons could be a real option. Cornerback Caleb Farley from Virginia Tech would also make sense. Outside of those two, a trade-down scenario would be more beneficial to the Bengals if they wanted to add to the defense at the top of the NFL Draft.