The Philadelphia 76ers are withholding an $8.25 million payment for All-Star point guard Ben Simmons amid his holdout and trade demand. If the organization is hoping that gets him to report back to the team, they may need to start preparing for a turbulent 2021-’22 NBA season.

Following a disastrous performance in the NBA Playoffs, a separation between the two sides felt inevitable. But when Philadelphia set a high asking price that no team was willing to meet, Simmons demanded a trade and vowed not to report for training camp.

The drama has already created a distraction at 76ers’ training camp. After defending his teammate, All-Star center Joel Embiid expressed disappointment regarding the situation then fired back at Simmons then fired back at the 76ers’ point guard after reports surfaced that Simmons was done playing with Embiid. 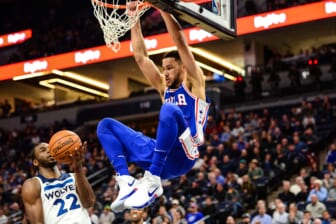 Many of the 76ers’ impact players, including Embiid, wanted to fly to California to meet with Simmons this summer. But he made it clear they weren’t welcome and reports surfaced that he would never play for Philadelphia again.

Will Ben Simmons play this season?

If the 76ers thought he was bluffing, ESPN’s Ramona Shelburne’s recent appearance on The Jump indicates the franchise is very wrong. The NBA insider spoke to people close to Simmons and it was made clear he is willing to sit well beyond a few games.

“Ben Simmons is willing to sit as long as it takes, too. When you talk to people close to Ben, and I say, ‘Worst-case scenario it takes all year, would he sit all year?’ And the answer right now is, ‘Yes.'”

It was made clear from Shelburne’s reporting that Simmons, as of now, has no intention of ever returning to Philadelphia. He is perfectly comfortable losing out on the already withheld $8.25 million and seems comfortable missing out on his entire salary for the season.

To this point, the 76ers haven’t backed down from their trade demands. They’ve reportedly sought De’Aaron Fox from the Sacramento Kings or assets from one of the Golden State Warriors or Minnesota Timberwolves that could help them land Damian Lillard.

Given the Portland Trail Blazers are keeping their star and Simmons is damaging any leverage the 76ers might have in negotiations, the front office might have to cave. Otherwise, they will play the upcoming season without one of their best players and without any contributors they could have acquired via trade.