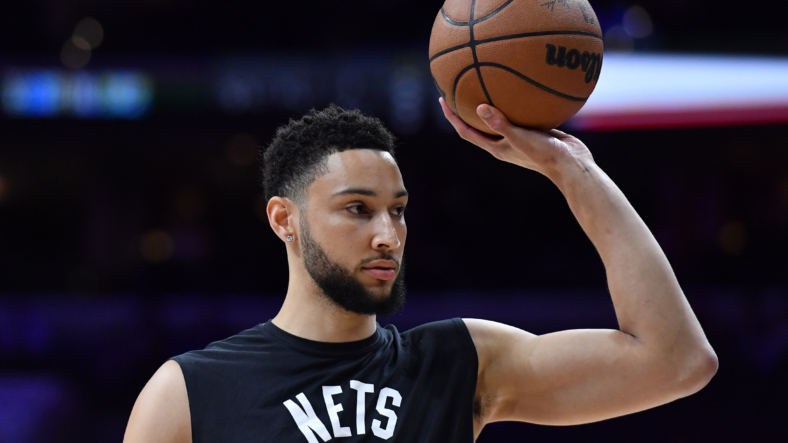 Recently, word emerged of the NBA considering making changes to their next Collective Bargaining Agreement. One of the changes included the possibility of teams being able to list players as inactive due to ongoing battles with their mental health. It immediately reminded several others of Ben Simmons and his final year with the Philadelphia 76ers.

In the 2021-22 NBA season, Simmons stated he wasn’t ready to return to the court, citing him being “in a bad place” after their 2020-21 playoff loss in which the star point-forward scored just 19 points in their last three games of the series.

This theme continued all season with the 76ers, including a time when the franchise actually suspended him for ‘conduct detrimental to the team’.

Of course, Simmons was eventually traded to the Brooklyn Nets at the NBA trade deadline as a part of the James Harden deal. Simmons eventually experienced back problems and had to miss the entire season as he recovered from a herniated disk requiring surgery.

Now, Simmons is just weeks away from making his debut with the Nets, and he recently sat down to talk about his strange experience with Doc Rivers and the 76ers. Specifically, Simmons appeared on his former teammate’s podcast, on J.J. Redick’s “The Old Man and the Three“. The three-time All-Star had several interesting things to say.

Simmons said while he felt the support from certain teammates, he didn’t feel the love from his coaches or some of his fellow peers on the floor. He added that he never felt himself during his five years in Philly.

Despite not feeling ready, the former No. 1 overall pick suggests he tried to get back on the court before being kicked out of practice by coach Rivers. Yet, Simmons said he spoke to Rivers before the practice, cautioning that he still wasn’t mentally fit to be on a basketball court. But Rivers didn’t seem to care, putting him in the scrimmage just one minute into the session after telling Simmons he was going to play him anyway.

At this point, Simmons felt what the 76ers were doing was on purpose, trying to push his buttons, but he also realizes he maybe didn’t handle things the best either. Ultimately, the 76ers started fining their once franchise cornerstone, but Simmons recently reached a settlement allowing him to recover nearly $20 million that was held back by the organization.

While Simmons doesn’t sound thrilled with his dealings with his previous organization, he’s happy about where he stands with the Brooklyn Nets heading into a new season. Paired with Kevin Durant and Kyrie Irving, it might just be the best roster he’s ever been a part of. He knows the playoffs are the expectation, but as a player who’s yet to win a ring, he’s aiming higher.

Championship aspirations should always be the goal, and they certainly were in Brooklyn a season ago too, when they had James Harden. Yet, the Nets still lost in the first round of the postseason. In fact, they didn’t even win a game against the Boston Celtics. That can’t happen again as Steve Nash enters his fourth season at the helm, especially if his players are already questioning his ability to coach.

Either way, one of the game’s best defenders will be back on the court for the first time since June of 2021, and that alone should be celebrated by all basketball fans. Even in Philly.