Pittsburgh Steelers quarterback Ben Roethlisberger will make his 235th regular-season start for the franchise on Sunday, but the future Hall of Famer could be nearing the end of his tenure as the starter.

Roethlisberger, age 39, has been one of the worst quarterbacks in the NFL this season. While many were high on the Steelers entering the year, the team is 1-2 and is being carried entirely by its defense. Entering Sunday’s game as an underdog against the Green Bay Packers, the talk about a quarterback change is starting.

Mike Tomlin made it clear there are no immediate plans to bench the Steelers’ legendary quarterback, even after his third rough start. But it seems around the NFL, there is a growing sense that a change is eventually coming.

According to CBS Sports’ Jason La Canfora, coaches and NFL staff across the league believe a change at quarterback for the Steelers is increasingly inevitable. 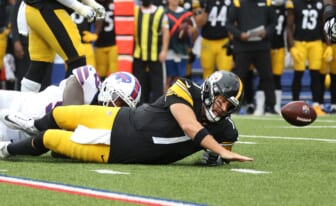 While the Steelers’ problems on offense don’t entirely fall on Roethlisberger, his play is declining sharply and having the most impact on this team. Entering Week 4, Pittsburgh is averaging the fifth-fewest points per game (16.7), the seventh-fewest yards per play (4.9) and is averaging just 4.7 points per first half.

He hasn’t looked like the same quarterback since undergoing surgery for total reconstruction of his throwing elbow in 2019. With his arm strength gone and an inability to make throws with consistent ball placement, Pittsburgh’s offense is predictable and easy to contain.

If the Steelers had a better option at quarterback, Ben Roethlisberger might no longer be starting. But even with Mason Rudolph and Dwayne Haskins behind him, it might only be a matter of time Pittsburgh is forced to bench a franchise icon.