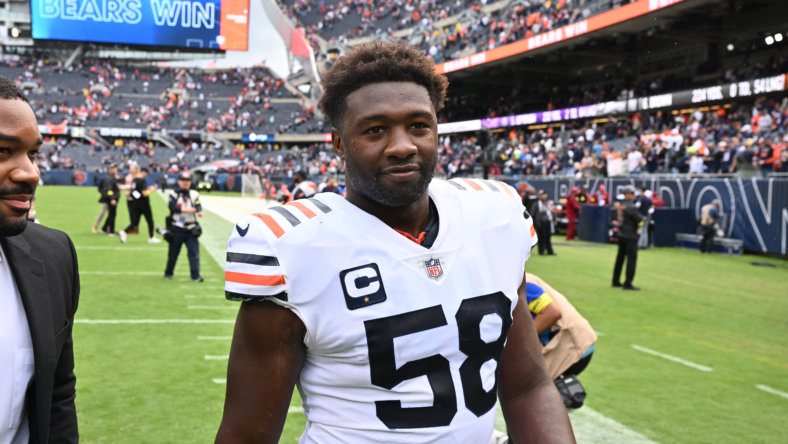 If Roquan Smith sheds any tears this week, they will be tears of joy. Long wanting a trade out of the non-competitive atmosphere that the Chicago Bears are currently mired in, Smith has been traded to the Baltimore Ravens, according to several outlets.

For Smith, it’s an immediate win, as he heads from a 3-5 team who appears to have no shot at catching the first-place Vikings in the NFC North to a 5-3 Ravens squad leading the AFC North. Instead of playing out the string of a lost season, Smith’s year is about to get a lot more intense playing for coach John Harbaugh as they pursue a deep playoff run.

According to Adam Schefter, the Ravens are parting with their 2023 second-round pick plus a 2023 fifth-round selection. Linebacker A.J. Klein is also headed from Baltimore to Chicago. With the Ravens also holding the Patriots’ fifth-round pick, it is not yet known whether they are sending their own or New England’s selection to Chicago.

But we do know the Ravens are adding a two-time second-team All-Pro linebacker to the middle of their defense.

While the Ravens are in first place, one of their biggest issues this season has been their defense, especially in late-game situations where they’ve allowed comeback wins in all three of their losses.

This is where Smith can help right away. The Ravens also spent a first-round selection on LSU’s Patrick Queen in 2020. But now Smith can join him as the starting linebackers in Baltimore, giving defensive coordinator Mike Macnonald another tool to work with.

Smith currently leads the NFL in tackles with 83 combined takedowns through eight starts in 2022. He also has racked up 2.5 sacks and two interceptions. While Smith can truly do it all on defense, Pro Football Focus has graded him quite poorly so far this season.

Now, part of these poor grades only tells part of the story, as he’s never graded real well by their metrics. His best grade, according to PFF, topped out at 67.2 in 2020, which was one of his All-Pro seasons. Still, adding a tackling machine will undoubtedly help the Ravens going forward.

The Ravens head into Week 9 allowing 22.9 points per game, which ranks 20th in the NFL. What’s holding them back is a lackluster pass D, which allows the fourth-most passing yards in football.

Now the Ravens will have two extremely athletic linebackers who can patrol the middle of the field, allowing the secondary to focus on the back end. How well it works remains to be seen, but this should be seen as a big win for general manager Eric DeCosta.

Now he just needs to get Smith signed long-term, as he’s currently set to be an unrestricted free agent at the end of the year. Still, getting a new contract done shouldn’t be difficult, as Smith is finally on a playoff team, right where he wants to be.