The Baltimore Ravens are close to adding a much-needed upgrade at running back with Denver Broncos veteran Melvin Gordon.

On Friday, NFL Network insider Ian Rapoport broke the news that the Ravens and the two-time Pro Bowler were currently in contract negotiations to bring his services from the AFC West to the AFC North.

Baltimore Ravens could get a much-needed RB upgrade

“Free-agent RB Melvin Gordon, the top player available at his position, is in discussions with the Ravens on a potential deal, source said. The Broncos starter is a person of interest in Baltimore, which still has a need at RB,” Rapoport wrote on Twitter.

Seven-year NFL veteran Gordon is one of the best free agents left on the open market, and undoubtedly the top available at RB. In his two seasons in Denver, he averaged 4.5 or more years per carry, and nearly rushed for over 1,000 yards in each season. In 2020, he logged 10 touchdowns — nine running — and matched the number last season, with eight coming on the ground.

A strong lead running back was a major need for the Ravens heading into this offseason. In 2021, the franchise had a startling milestone as quarterback Lamar Jackson led the team in rushing with 767 yards. Second on the season stats sheet was former Atlanta Falcons star Devonta Freeman with an underwhelming 576 yards in 16 games. However, it was a running game by committee effort as Latavius Murray also added another 501 yards on the ground in 14 games. 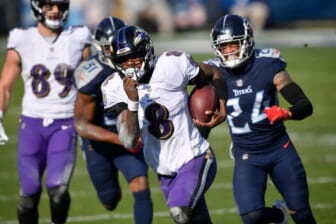 If Gordon is signed, he will add a legitimate starter who has been a consistent contributor throughout his career playing with the Broncos and Chargers and would make a strong lead with both Freeman and Murray no longer on the roster.

Gordon’s deal is likely to be in the $3 to $5 million per year range after he earned $4.5 million in Denver last season.