Austin Hill will make his NASCAR Cup Series debut for Richard Childress Racing in the No. 33 car at Michigan International Speedway this weekend. 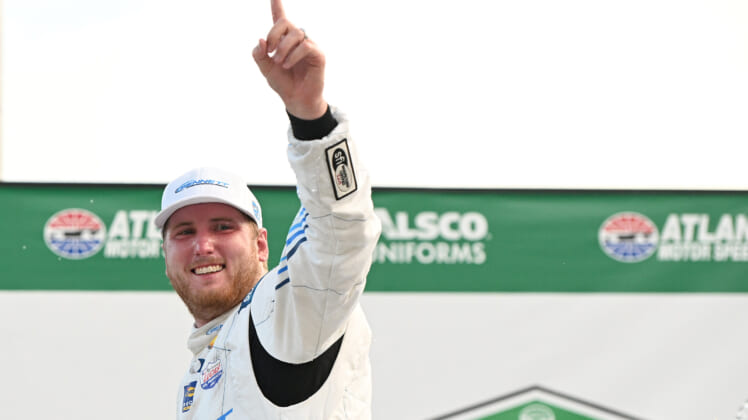 Austin Hill will drive the No. 33 car for Richard Childress Racing in this weekend’s NASCAR Cup Series race at Michigan International Speedway.

Hill, 28, currently drives the No. 21 car for the organization in the NASCAR Xfinity Series. This will be his first Cup Series start as the entry list is set at 37 drivers.

The 28-year-old driver has won two times this season, both at superspeedways in Daytona and Atlanta. Austin Hill will have the privilege to pilot the No. 33 car for Richard Childress for the first time since 2015.

Hill moved up to the Xfinity Series after spending three years with Hattori Racing Enterprises in the NASCAR Truck Series. The now full-time Xfinity Series driver did not win a championship but won eight times.

Due to other circumstances, Hill will now make it so the top-six drivers in the Xfinity Series standings have made a Cup Series start following this weekend.

It’s truly an inspirational rise to success after spending time with lower teams, such as Young’s Motorsports, before his years of contention started to begin.

Austin Hill’s debut will be one to watch as it is rare to see new faces enter Cup Series events with organizations of this caliber late into the season.

Other notable entries on the NASCAR entry lists at Michigan

Blaine Perkins will drive the No. 02 car for Our Motorsports in this weekend’s NASCAR Xfinity Series race at Michigan International Speedway. Perkins currently runs full-time in the NASCAR Truck Series.

The 22-year-old driver’s last Xfinity Series race was for Our Motorsports at the 2021 Fall Phoenix race in the No. 23 car. Most notably, Perkins won a stage at Talladega Superspeedway.

Anderson has not attempted an Xfinity Series race during the 2022 season to this point due to Myatt Snider driving the No. 31 car full-time for the organization.

This has been a rumored move for months and it finally comes to fruition at Michigan. Anderson will need to qualify on time as there are 41 entries on the entry list.

Joe Graf Jr. also returns to the No. 07 car for SS-Green Light Racing after missing the last two events. Graf was dealing with a personal matter away from the track.

Josh Williams moves to the No. 5 car for B.J. McLeod Motorsports while Matt Mills will have the duties of driving the No. 78 car for the organization instead.

Sammy Smith will return to the No. 18 car for Joe Gibbs Racing in his third start after wrecking at Pocono Raceway a few weeks ago. Smith, 18, is one of Toyota’s prized young prospects.

John Hunter Nemechek will drive the No. 26 car for Sam Hunt Racing following his controversial race in the NASCAR Truck Series at Lucas Oil Raceway when he spun leader Taylor Gray.

Kaz Grala will compete in his second straight event with the No. 48 car and Big Machine Racing after coming back for a road course event in Indianapolis, IN.

Finally, Dillon Bassett will drive the No. 77 car for Bassett Racing as they look to make another event after struggling to qualify earlier in the year.

Stay tuned for any more updates on NASCAR entry lists at Pocono should they break, along with any more news on Austin Hill’s Cup Series debut at Michigan.