It’s been said a thousand times. If a team starts their year 0-2, the season is over, they can’t make the playoffs. Playing on one of the teams to begin 0-2, Matt Ryan doesn’t think the Atlanta Falcons should throw in the towel yet.

In fact, Ryan makes the argument that NFL historians can throw all the old stats out for teams who start slow, and he has a great reason why. Here are his comments via CBS Sports.

“Seventeen games,” he said when asked why he’s not down after the 0-2 start. “You can throw all the old stats out. With that extra game, none of those rules apply that were there before. We’ve got a long way to go. We’ve got 15 games to go. I think we’re a young team that made strides from Week 1 to Week 2. We need to continue to make strides as we go into Week 3. If we can do that, I really feel like we’ve got enough weapons and the right people that we can correct this thing and get it moving in the right direction.” 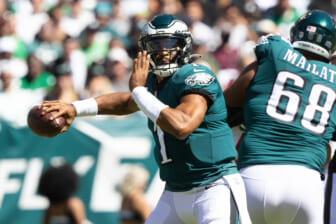 The stats Ryan are referring to has to do with teams starting their year with back-to-back losses playing a 16-game season. These numbers are based off a 12-team playoff format. Which, aren’t as relevant now that 14 teams will qualify for postseason play.

Sometimes teams have an incredibly tough early schedule, thus leading to an 0-2 start. If it were possible for a small percentage of teams to still make it to the playoffs after losing their first two games before, it should only be easier now with an extra game. As Matt Ryan pointed out, teams now have a better chance than ever before to turn their season around.

In 2020, all 11 teams who started 0-2 ended up missing the playoffs. Now with teams playing 17 regular-season games for the first time ever, an 0-2 start shouldn’t be considered the end. Not only is there an extra game, last year the NFL expanded their playoff rules to include 14 teams instead of 12.

Do these rule changes mean one of the seven 0-2 teams still has a chance to clinch a playoff spot? Maybe not for teams like the Jets, Jaguars, or Lions. But for a team like the Colts, Giants, or Vikings, who are just one game behind their division leaders, the season is still young.

For the record, the Colts take on the 1-1 Tennessee Titans and the Vikings take on the 1-1 Seattle Seahawks this Sunday. The Giants go to battle with a fellow 0-2 opponent in the Falcons. While an 0-2 start is about the worst way to start your football year, there’s always a chance at going 0-3.

There have only ever been six teams to start 0-3 and reach the playoffs. But as mentioned, that number too will rise thanks to the recent rule changes.