Arizona Cardinals come from behind to beat Jacksonville Jaguars, improve to 3-0 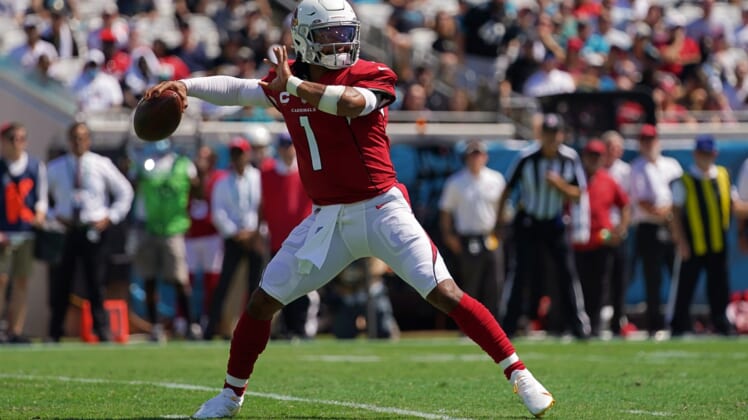 Kyler Murray passed for 316 yards and cornerback Byron Murphy had two interceptions, one returned for a touchdown, to lead the unbeaten Arizona Cardinals to a 31-19 victory Sunday over the host Jacksonville Jaguars.

Murray rushed for a touchdown and completed 28 of 34 pass attempts with no touchdowns and an interception for Arizona (3-0).

Christian Kirk finished with seven receptions for 104 yards and A.J. Green had five catches for 112 yards.

The game included a play tied for the longest in NFL history when Matt Prater’s 68-yard field goal attempt as time expired in the first half fell short, Jamal Agnew fielded the ball in the end zone and made a 109-yard return for a touchdown.

The play occurred after Murray completed a 12-yard pass to Chase Edmonds, who went out of bounds at the 50 with 2 seconds left in the half. Prater came in for the 68-yard attempt, which would have broken his NFL record of 64 yards set in 2013 when he was with the Denver Broncos.

Josh Lambo missed the extra-point attempt after Agnew’s return and the Jaguars (0-3) went into halftime leading 13-7, the first time they have led at halftime this season.

In its second possession of the third quarter, Jacksonville went exclusively to its running game, amassing an eight-play, 75-yard scoring drive highlighted by James Robinson’s 66 yards on six carries. Robinson capped the possession with a 4-yard run, Jacksonville’s first rushing touchdown of the season.

Lambo missed another extra-point attempt and Jacksonville led 19-10 with 3:37 left in the third quarter.

Robinson finished with 88 yards on 15 carries and also had six receptions for 46 yards.

After Robinson’s touchdown, Arizona scored on a 75-yard drive that took only 2:12, culminating with James Conner’s 4-yard touchdown run to cut the lead to 19-17 with 1:26 left in the third.

Two plays into Jacksonville’s next possession, Trevor Lawrence was intercepted on a flea-flicker play by Murphy, whose 29-yard return for a touchdown gave the Cardinals a 24-19 lead with 35 seconds remaining in the quarter.

Lawrence completed 22 of 33 pass attempts for 219 yards with one touchdown and two interceptions.