Antonio Brown's legal team rushed to his defense on Friday when a civil lawsuit was filed against him based on an alleged incident from last year.

Tampa Bay Buccaneers wide receiver Antonio Brown is facing a civil lawsuit for an incident involving a moving truck driver who asserts that Brown battered and assaulted him last year.

Brown’s legal team was having none of it, though, implying that the plaintiff’s lawsuit, based on its own innate language, implies that this is a cash grab, per NFL Network’s Ian Rapoport:

That lawsuit was filed Wednesday by Anton Tumanov, and Matt Baker of the Tampa Bay Times reported the key details from it, as Tumanov alleges Brown and his trainer, Glenn Holt, caused him severe injuries.

“[Tumanov] continues to suffer severe bodily injuries, pecuniary losses, and mental anguish,” the lawsuit reads, per Baker, as Holt and Brown face one charge of battery and assault each.

After numerous off-field issues and personal conduct issues saw Brown wear out his welcome with the Pittsburgh Steelers, and then the Las Vegas Raiders and New England Patriots in quick succession, his NFL career was nearly over.

But Tom Brady took Brown under his wing as the All-Pro wideout signed with the Tampa Bay Buccaneers in 2020. It turned out to be a great move for all parties involved, as Brown was a key contributor to the Super Bowl LV-winning team.

At least for now, it appears that Brown is focused on football and is putting the team above himself. He might’ve been considered radioactive anywhere outside of Tampa Bay as a free agent this offseason, yet he probably could’ve waited it out on the open market and made more money elsewhere.

Instead, Brown decided to run it back with Brady and the Bucs for 2021.

Provided the legal team’s terse words are, in fact, true, Brown should be pretty much in the clear when it comes to this lawsuit. Nevertheless, it’s yet another red flag raised in the 32-year-old’s checkered past. There’s an obvious pattern of behavior that’s only recently changed. 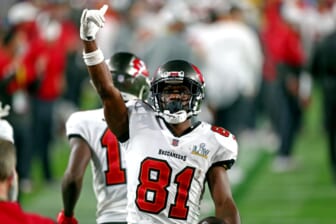 To play devil’s advocate to this whole situation, and how Brown seems to have it together now as a player and, more importantly, as a person away from the gridiron: If you think about Tampa Bay’s offseason moves, maybe general manager Jason Licht was already potentially preparing for life without Brown going forward.

Think about it: Brown is more of a luxury weapon in the Bucs’ explosive passing attack than an absolutely necessary one. They already have Mike Evans, Chris Godwin, Scotty Miller and rising second-year player Tyler Johnson at receiver. Licht traded up in the fourth round of the 2021 NFL Draft to select North Texas receiver Jaelon Darden, too.

With Miller proving himself as a deep threat in 2020, Johnson making clutch, timely catches amid a championship run and Darden’s unique burst and short-area quickness bound to get him on the field soon enough, where does Brown really fit in?

And that’s not even to mention Tampa’s loaded tight end group, with Rob Gronkowski, Cameron Brate and O.J. Howard.

Brown needs the Buccaneers more than they need him. Perhaps this civil case will blow over, but if it doesn’t? It seems like Tampa Bay is in ideal position to just show Brown the door if the outcome of the lawsuit doesn’t go his way.

The last thing a team that’s chasing back-to-back Super Bowls needs is a distraction in the locker room that detracts from the goal at hand. Brown was on his best behavior in 2020, but can it keep up? Maybe the Bucs won’t wait for a blow-up incident find out. 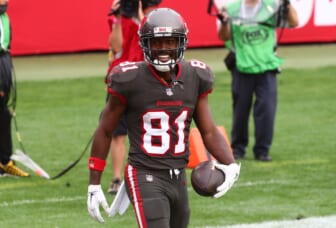