The New Orleans Saints will be without Alvin Kamara for Week 17 and potentially for the first round of the playoffs due to a reported positive COVID-19 test. 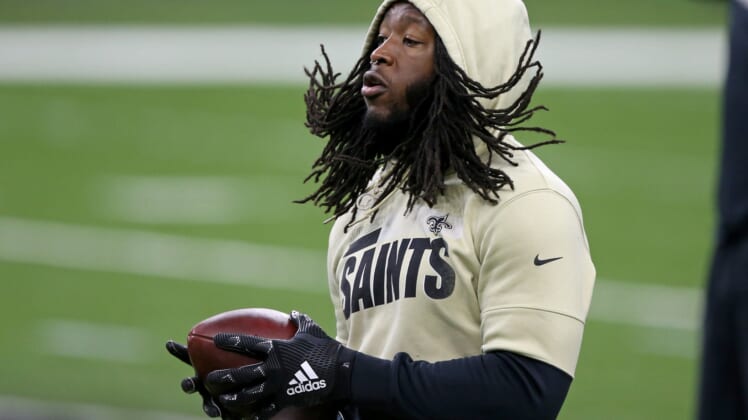 New Orleans Saints running back Alvin Kamara matched the NFL record with six rushing touchdowns on Christmas Day, but after getting fined for the cleats he wore during that historic performance, he was also placed on the COVID-19 list on Friday after a positive test and will be out for at least Week 17.

Kamara is a premier playmaker in the Saints’ offense as a ball-carrier and pass-catcher, and now it’s unclear whether he’ll be in action to begin the postseason. Furthermore, the entire Saints running back room is going to miss at least Sunday’s contest against the Carolina Panthers, as they’ve been deemed high-risk close contacts.

The Saints announced they were deactivating Kamara for the time being, while ESPN’s Adam Schefter reported on Kamara’s COVID-19 positive test, which featured conflicting information at first:

Latavius Murray would’ve taken over for Kamara as the lead back in New Orleans’ offense, yet Fox Sports insider Jay Glazer painted the ominous picture of what the Saints are doing personnel-wise to compensate for their depleted depth chart:

Head coach and play-caller Sean Payton has grown accustomed to altering the game plan on the fly a lot this season, with legendary quarterback Drew Brees missing extended time due to injury and Taysom Hill starting in his place. But Kamara has been a reliable constant that Payton can’t count on at least for right now, nor can he lean on Murray.

Kamara racked up 932 yards rushing on 187 carries (five yards per tote) with 16 touchdowns, and had a ridiculous 83 receptions for 756 yards and five additional scores. That latter total was in spite of the fact that New Orleans has endured long stretches of the season without superstar wide receiver Michael Thomas, leaving Kamara as the obvious go-to target in the passing game.

When Hill was the starting quarterback, though, Kamara’s role as a pass-catcher diminished. Brees’ return wound up catalyzing Kamara’s incredible Christmas Day performance, but now the 25-year-old has to patiently wait until he clears NFL protocols to return to the gridiron.

Since Brees is so reliant on Kamara, he’ll be hard-pressed to operate at a high level in Week 17 on the road against the Carolina Panthers, whose maligned defense has shown signs of life in the past two weeks. Carolina would love to play spoiler to its NFC South rival.

Murray is a passable receiving back who Brees can find on check-down throws, yet there’s a real possibility the aging signal-caller is under siege on Sunday and would benefit greatly from a spectacular underneath route-runner like Kamara being on the field. As it stands, Brees won’t even have Murray to pound the rock between the tackles.

One ray of hope remains for the Saints in terms of playoff scenarios where they’d sweat the Kamara COVID setback less. New Orleans can achieve a first-round bye by defeating the Panthers, and if Green Bay loses to Chicago and Seattle bests San Francisco.

Although a lot has to go right for that to happen, even building confidence with a strong offensive performance against Carolina sans Kamara could do wonders for New Orleans’ collective mentality before the Wild Card Round. The greater concern is what the Saints will do beyond Week 17 if they have a patchwork backfield platoon going forward.