Alvin Kamara scored six rushing touchdowns to match an NFL record for the New Orleans Saints in their 52-33 win over the Minnesota Vikings on Christmas Day. 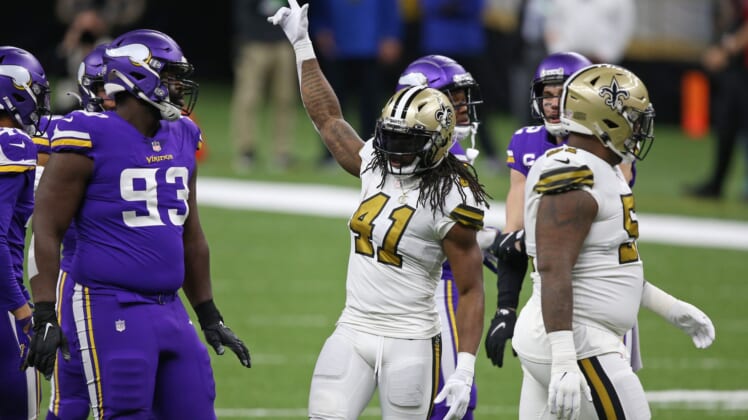 Let’s look at some of the praise that came Kamara’s way as he became the holiday gift that kept on giving for New Orleans fans and his fantasy owners.

Questions lingered as to how well Kamara could hold up as the lead running back after he dealt with injuries last season. In fact, the 25-year-old has experienced a steady decline since exploding onto the scene as a rookie in 2017.

The thing is, though, even a slight dip in production for Kamara still means he’s among the league’s best all-around backs.

What hasn’t changed is his prolific pass-catching ability. Now, he’s pairing that with durability, late-year health and hard pure running. The Vikings felt the full wrath of that lethal combination, which ultimately dashed what remained of their playoff hopes.

No matter what ill effects aging Saints quarterback Drew Brees is showing, as long as he takes care of the football, New Orleans should be just fine in the playoffs, especially if Kamara keeps playing like this. The Saints might have even been hoping Kamara would slow down as a means of possibly saving some of these explosive plays for the postseason.

The only negative reaction from his historic outing was the fact that head coach Sean Payton didn’t keep Kamara out there to possibly run for another score. He’ll have to settle for tying the record.

In any event, Kamara is putting to rest what little criticism should still persist about him as a player.

What’s more, perhaps forced by the absence of injured superstar receiver Michael Thomas, Payton might have unearthed a new offensive identity on the fly. Saints teams of yesteryear relied heavily on Brees’ arm. Their Super Bowl chances may well come down to whether Kamara can establish the run well enough.