The 2021 NFL season is fast approaching and future Hall of Fame running back Adrian Peterson remains a free agent. Determined to prolong his NFL career, Peterson’s name could heat up in the rumor mill before long.

While it was evident last season that Peterson’s best days are long behind him, he still contributed for the Detroit Lions. He not only served as a mentor for D’Andre Swift, but also maintained a prominent role in the offense and produced.

The latest updates on Saquon Barkley in his return from a torn ACL are promising. He showed off his ability to make cuts, a crucial test for the stability of his ACL. But the Giants will be very cautious with their franchise running back and could even limit his workload to begin the 2021 season. 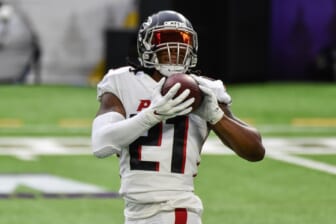 It’s smart thing, especially if the team wants to sign Barkley to a long-term contract. But it’s difficult to trust Devontae Booker as a No. 2 back. He can be the third-string back, seeing more touches early in the season, but New York could benefit from adding Peterson.

Peterson could handle some of the goal-line touches to open the season, spelling Barkley after long drives. He would also be the perfect player to help Barkley along during his first season back from a torn ACL, something Peterson has plenty of experience with.

While this would technically count as a reunion, circumstances have changed in Detroit. The Lions brought in a new front office and coaching staff, meaning this wouldn’t entirely be a familiar setting for Peterson. He also wouldn’t have the same role, given Detroit signed Jamaal Williams. But with only a few teams in the market for a veteran running back, Peterson should listen to the Lions.

With D’Andre Swift being moved around more, viewed more as a modern NFL weapon, there would be opportunities to get carries. The Lions are a run-first offense with Anthony Lynn calling plays and they boast an offensive line that embraces run blocking. AP wouldn’t repeat his seven touchdowns from this past season, but he might be more effective than before.

The Miami Dolphins essentially ignored the running back position this offseason, to the frustration of many fans. While adding a high-end running back would make this offense even more exciting, a committee approach can work. But the Dolphins lack veteran experience at the position and this might be the perfect landing spot for Adrian Peterson. 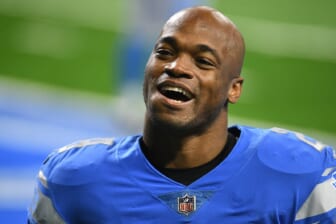 Of all the teams on this list, Miami certainly offers the best chance to win a Super Bowl and at the very least a shot to make the NFL Playoffs. If that isn’t incentive enough for AP, the only player standing in his way from a sizable workload as the No. 2 back is Malcolm Brown.

There’s something in this for Miami, too. Peterson can work with Myles Gaskin, teaching him some of the finer points that make a running back even better. Plus, sitting just 449 yards shy of Barry Sanders on the all-time rushing yards list, this would create a fun milestone to track during the Dolphins’ season.