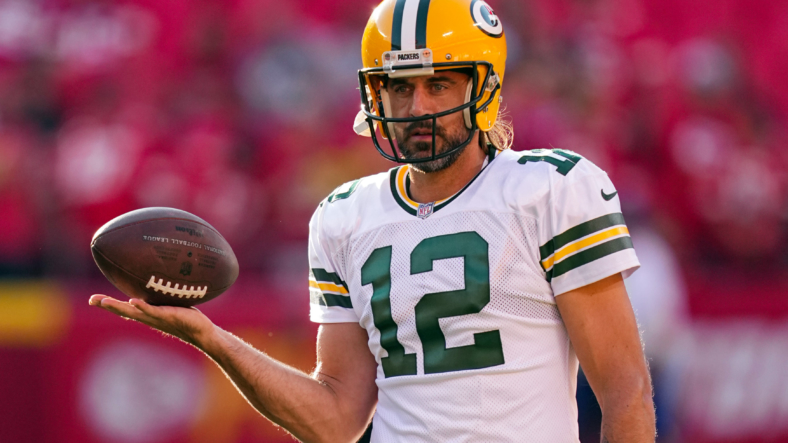 At various points during the back nine of his career, Aaron Rodgers has managed to become a controversial figure. Sometimes it’s by his actions, and others, it’s because of his words.

The four-time NFL MVP’s recent appearance on the ‘Joe Rogan Experience’ podcast shouldn’t raise any red flags. Unless, you’re on the business side of the NFL.

In a wide-ranging podcast appearance, Rodgers and Rogan hashed out several different topics, including his “immunized” moment from last season.

But perhaps the most notable segment came when Rodgers delved into his past experiences with painkiller medication, and how the NFL has continued to drop the ball when it comes to pain management for it’s athletes. First he spoke about his personal experience of handling pain, and what he used to manage it earlier in his career.

Aaron Rodgers admits NFL has improved, but not enough

Then Rodgers admitted that the NFL has taken steps to improve their effort, such as their $1 million investment toward the study of cannabis and CBD back in February, but the QB is still perplexed over how the league doesn’t support the use of CBD and other natural pain management remedies that don’t cause harm. In 2022, the NFL still bans the use of CBD and marijuana. Rodgers called the whole system “ass backwards”.

Once again, Rodgers makes a great point that’s hard to argue. It seems the NFL would rather have their players addicted to harmful drugs and painkillers, instead of actually caring about their long-term health by using natural and safe remedies.

Gee, where have we heard this one before? It’s not a surprise to hear about the NFL being so short-sighted and not having any concerns about players once they’ve retired.

In this case, Rodgers hit the issue right on the head. It’s time for the NFL to go away from these nasty substances Rodgers mentions like Oxycodone, Percocet, and Vicodin. None of those are natural, and as Rodgers has said before, he doesn’t want that crap in his body. We don’t blame him.