Green Bay Packers legend Aaron Rodgers gave a subtle but meaningful clue that his tenure with the team could be over just minutes after their season-ending loss to the Detroit Lions on Sunday night.

The 2022-2023 season was far from what the Packers hoped for entering the year. Following three straight 13-win seasons and back-to-back NFL MVP campaigns for Rodgers, Green Bay was expected to be Super Bowl contenders once again. However, the team struggled for much of the season and even lost five straight at one point.

The legendary quarterback and his young receiving corps seemed to have no chemistry and their once high-powered offense was middle-of-the-road at best. Yet, a four-game win streak at the tail end of the season seemed to give hope that the unit had finally gelled, as they put themselves in a win-and-in playoff scenario in Week 18.

Unfortunately, despite a halftime lead, the Green Bay Packers lost to the Detroit Lions on Sunday night. Now, many will wonder if this disappointing season could be the reason Aaron Rodgers lacked in the spring to finally call it a career. Well, the 39-year-old might have hinted at a likely retirement minutes after the game.

After NFL games, especially matchups that feature well-aged legends and superstars, players exchange jerseys so they can own their own unique memorabilia. Immediately after the Green Bay Packers were handed a heartbreaking loss from the Lions, Detriot wide receiver Jameson Williams inquired with the future Hall-of-Famer about getting a piece of history with his jersey.

However, Rodgers declined and told the 2022 first-round pick. “I’m gonna hold on to this one.” Obviously, the signal-caller didn’t say the words “retirement,” and may have a massive collection of game jerseys at home, but feeling he needed this one is a bit surprising.

For a player locked into two more seasons on the three-year, $150 million deal he signed in the offseason, why would he want a memento from a terrible moment in his career? The night he lost two a rival team and missed out on a rare playoff opportunity after a massively disappointing season. Unless, this could be his final game, and that would be a good reason to hold on to the jersey. 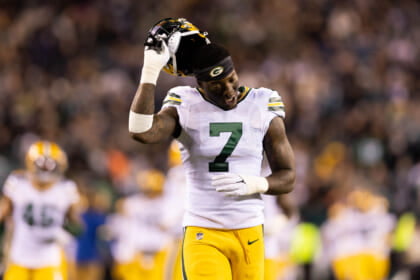 The speculation will likely rage for the next few weeks about what Aaron Rodgers decides to do, but if you are looking for an early sign, holding on to his jersey from Jan. 8, 2023, maybe one of the first and best clues yet.