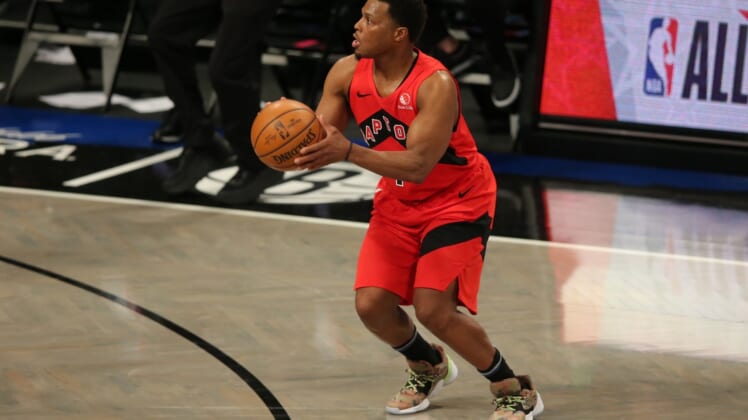 Boasting the best record in the Eastern Conference at 20-11, the Philadelphia 76ers don’t seem to have many holes ahead of the NBA trade deadline. That’s why it’s been pretty quiet on this front since Philadelphia failed to land James Harden earlier in the season.

In no way does this mean 76ers front office head Daryl Morey is going to be inactive leading up to the March 25 NBA trade deadline. In fact, he’s apparently looking to go big-game hunting. That includes Toronto Raptors All-Star point guard Kyle Lowry.

“League sources say Philadelphia, which came up short in its bid for Harden, is still seeking major moves to increase its championship odds,” Kevin O’Connor of The Ringer reported Monday. “The trade market still needs to take shape in the coming weeks, so realistic targets are unclear. But one name to monitor is Raptors point guard Kyle Lowry, a 34-year-old Philadelphia native in the final season of his contract. A veteran perimeter shot-creator is the only piece the Sixers truly lack, and there aren’t many other players on Lowry’s level who are even theoretically available.”

NBA rumors have indicated that Lowry could very well be on the trade block. He’s in the final year of his contract. Meanwhile, the struggling Raptors might want to get some assets for a player that doesn’t fit into their long-term plans. Right now, the NBA trade market is thin with a majority of teams still in the playoff hunt. Lowry would net Toronto a huge return.

The six-time All-Star continues to play at a high level. Lowry is averaging 17.7 points, 5.4 rebounds and 6.4 assists on 45% shooting from the field. He’s also shooting 39% from distance, which is up from each of the previous two seasons.

How would Kyle Lowry fit with the Philadelphia 76ers?

Obviously, Ben Simmons mans the point guard position in Philadelphia and is about as ball-dominant as it gets for a non-traditional floor general.

Adding Lowry to the mix would enable the 76ers to play Simmons a bit more off ball. It would also give Philadelphia an outside shooting threat to pair up with recently-acquired veterans Seth Curry and Danny Green. In fact, the lesser known of the Curry brothers is shooting a resounding 45% from distance this season.

When Morey took over in Philadelphia, the primary issue here was outside shooting under then-coach Brett Brown. Adding Lowry to the mix could change that. A core four of Simmons, Lowry, Joel Embiid and Tobias Harris would like real nice. However, pulling off a Kyle Lowry trade ahead of the March 25 is complicated.

How would a Kyle Lowry trade look ahead of the NBA trade deadline?

Regardless of his status as an impending free agent, Toronto is not giving away its franchise stalwart for pennies on the dollar. There’s also something to be said about the salaries matching.

As of right now, the Philadelphia 76ers are $11.4 million over the luxury tax and a whopping $34.9 million over the cap. This means that salaries would pretty much have to match with Toronto receiving assets, either in draft picks or young players, for a deal to be worked out.

Short of the 76ers offering up Tobias Harris (and the Raptors wanting to take on his contract), this could get a bit convoluted. Philadelphia would have to move Danny Green and Mike Scott in order for the salaries to come close to matching.

From there, Terrance Ferguson and Tony Bradley would be salary throw-ins. In order to make this hypothetical Kyle Lowry trade worth the Raptors’ while, offering up Tyrese Maxey or Shake Milton as well as a future first-round pick would have to be in the cards.

Is that something the 76ers would be willing to do ahead of the NBA trade deadline? I am not too sure. But it’s an interesting scenario.