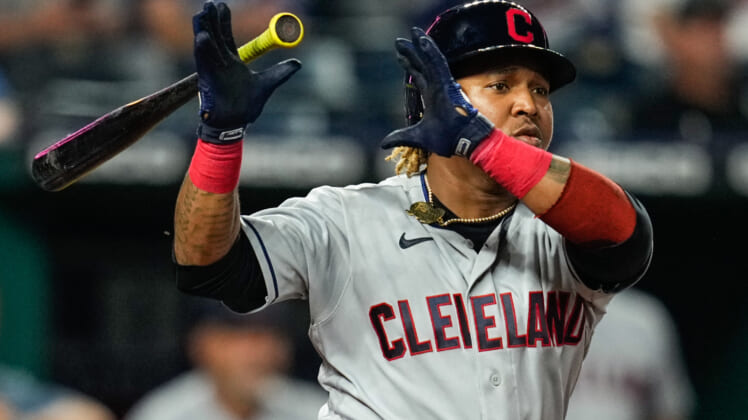 Cleveland Guardians star Jose Ramirez is popping up in MLB trade rumors with his franchise seemingly focused on trimming payroll instead of contending. If the All-Star third baseman is available, countless teams will be lined up with offers.

Ramirez is one of the best players in MLB. Since the 2019 season, he ranks sixth in FanGraphs’ Wins Above Replacement (6.3) and he made the All-MLB Second Team in 2020. If the Guardians don’t view Ramirez as a long-term piece of their playoff core, clubs who are ready to contend will happily try and make a move.

The acquisition cost will be through the roof. Fortunately, some of the best teams also have loaded farm systems and can afford to unload prospects for impact talent.

With that in mind, let’s examine the best Jose Ramirez trade destinations.

It comes as no surprise that the Toronto Blue Jays inquired on Jose Ramirez, per Ken Rosenthal. A front office that signed Kevin Gausman, George Springer and traded for Jose Berríos and Matt Chapman is aggressive by nature. Toronto wants to win now and Ramirez is the final piece to essentially create the ‘Infinity Gauntley’ of MLB lineups.

With a surplus of premium middle-infield prospects, the Blue Jays can afford to part with multiple. As for Nate Pearson, he represents a nice buy-low opportunity for the Guardians. The talent still exists to be a front-line starter or a top closer, but durability and command are issues.

This deal would certify the Blue Jays lineup is the best in MLB. Springer and Vladimir Guerrero Jr. are AL MVP candidates. Teoscar Hernandez, Bo Bichette and Chapman are All-Star players. Throw Ramirez into the middle of that lineup, with a top-10 rotation, you’ve got something special.

The Tampa Bay Rays made a run at Freddie Freeman, but he wisely chose the Los Angeles Dodgers. It proves that with the Wander Franco extension signed, the Rays want to build a much better team around their superstar. For so many reasons, Ramirez is perfect for Tampa Bay.

Cleveland has a history of wanting MLB-ready players or those who are approaching their debuts. Austin Meadows, floated in trade rumors, provides a middle-of-the-order bat to the lineup and fills a need in the corner outfield. He can be packaged with top prospect Vidal Brujan and outfielder Josh Lowe as the centerpieces of a deal, with Tampa Bay sending some of its young minor-league pitching to Cleveland.

As for the Rays, it lands a star to plug in immediately at third base or second base. Ramirez can be an MVP threat in the Rays’ lineup, hitting alongside Franco in the lineup. Plus, he would likely be open to a contract extension with a club that should be open to keeping a fantastic core together.

There is nothing Jerry Dipoto loves more than trades. An opportunity to acquire one of the best infielders in baseball would scratch his itch. Seattle is currently allowing Adam Frazier to hold things down at second base, but he’s better utilized as a utility player. Enter Ramirez and things get interesting.

There’s a very, very short list of players the Mariners should be willing to trade Noelvi Marte for, Ramirez is one of them. Seattle would be injecting .30-plus homers and a .360 OBP atop its batting order. If Dipoto wants Ramirez to play third base, Eugenio Suarez serves as the designated hitter.

We haven’t seen the San Francisco Giants make a big splash this offseason. That’s not to say smart moves weren’t made, the rotation is one of the deepest in MLB. However, there’s no denying the lineup is missing an impact bat following Buster Posey’s retirement.

Ramirez’s contract makes him one of the most valuable players in baseball. San Francisco is also flush with money to spend, so a long-term deal would be in everyone’s best interest. In terms of the potential fit, Ramirez slides atop the lineup and plays second base and he can move to third if Evan Longoria lands on the injured list.

At this point, the Giants need to do something. The Los Angeles Dodgers – No. 1 in our MLB power rankings – added Freeman to a lineup that was already superior to San Francisco. If the Giants sit back and don’t make a big move, there is going to be a wide gap in the NL West standings.