The Minnesota Timberwolves have become a legitimate Western Conference playoff contender. A healthy trio of Karl-Anthony Towns, Anthony Edwards and D’Angelo Russell headline a tantalizing and could-be elite offense. Can they do damage in the playoffs? That’s where the NBA trade deadline comes into play.

There are players outside of the “big three” who have shown promise and/or provided the Timberwolves with consistent production this season like Jarred Vanderbilt, Jaden McDaniels and Jaylen Nowell. That said, this team needs veteran complements to deepen and further weaponize head coach Chris Finch’s offense.

With that in mind, here are three players the Timberwolves should target before the NBA trade deadline.

The Pacers have supposedly been trying to move Lamb for a year, and the veteran guard would be a savvy pickup for the Timberwolves.

One of Minnesota’s more imminent needs is a proven wing scorer to play alongside Russell and Edwards. Lamb fits the bill. He has traditionally been an effective shooting scorer who stretches the floor and can shoot off the dribble. Another option is Lamb coming off the bench, serving as a veteran scorer for the second unit to help pick up the slack when the starters get a breather.

Albeit he’s in the midst of one of the worst seasons of his NBA career, Lamb is also coming off a season where he shot 40.6 percent from beyond the arc. A change of scenery could see Lamb return to being a quality player for a playoff team like the Timberwolves given the uncertainty that surrounds the Pacers.

Minnesota can send Indiana their upcoming second-rounder and Prince, who’s on an expiring contract and has fallen out of favor in Finch’s rotation. The Timberwolves surrender a minimal, if any element of their future for Lamb while the Pacers can see how Prince fits in their system and get a second-rounder for their troubles. 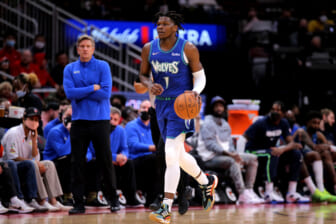 There’s another player the Timberwolves can attempt to get from the Pacers, that being Justin Holiday.

The 32-year-old is an ideal pickup for Minnesota. He’s a respectable shooter who moves and defends well. Holiday could either slide into an off-the-ball starting role, where he’d get a great deal of open looks given the attention those next to him attract, or be a two-way player off the bench who gets considerable playing time. He gives an improving defensive team another asset on that end of the floor.

Holiday is an attractive trade option for NBA teams because he has a team-friendly $6 million salary and is under contract through the 2022-23 NBA season. In other words, Holiday would be a glue piece for the Timberwolves for the next season and a half.

Minnesota can send Indiana a pair of young players (Okogie and McLaughlin) who would get minutes in head coach Rick Carlisle’s rotation after they presumably trade some of their starters and an upcoming second-rounder.

You can’t have enough scoring in the NBA, and Ross’ scoring knack would be a tremendous fit on the Timberwolves.

Ross is a proven and steady wing. He’s adept at creating his own shot inside the three-point line, is a respectable outside shooter and has been a reliable and productive veteran for a young Magic team this season; he inherits a similar situation with the Timberwolves except they’re in playoff contention.

Whether it be as a starter or reserve, Ross makes a difference for Finch’s rotation. As a starter, he’ll get plenty of open looks while having the ability to score on his own. Coming off the bench, Ross would be the leading scorer for the second unit, where he provides a veteran presence for a young group. Under contract through 2022-23, the Timberwolves are signing up for Ross to boost their offense this season and be part of an advanced version of it next season.

Minnesota can send Orlando their upcoming first-rounder and Prince, who can carve out a role for himself on a deeply entrenched rebuilding team. Ross will have a larger instant impact than any player the Timberwolves could draft with their potential late-teens first-round pick.