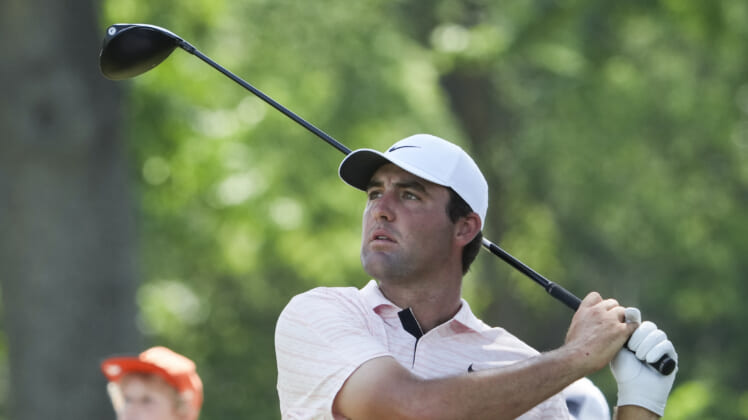 It has been 15 years since Southern Hills Country Club hosted a PGA Championship, which Tiger Woods won.

Woods recalled his 2007 PGA Championship victory – when it was held in August before the PGA Tour calendar shifted a few years later – with heat and unique shots.

“It was obviously a very different golf course. It was not cold that week. I remember playing behind (John Daly) the first day which was awesome. It was 109 (degrees) that first day, I think. And I asked J.D. how many waters he drank that first day. He said, ‘No. I had 13 Diet Cokes.’

It was a great week. A very different golf course. A lot of irons and strange irons. You usually don’t hit a 6-iron on a par-4, but we did that week.”

Following Woods’ win, the course was remodeled 11 years later in 2018 as changes have been on display as players prepare for this week’s major.

A situation might come where the extra length could come into play and cause a pause in the action. Golfers might have to wait to hit their tee shot on the seventh hole in the event a shot on the par-3 sixth hole that goes beyond the green could land on the seventh tee box.

One reason for the lengthening of holes is because players today hit the ball harder and farther. As a result, the challenge of a shorter hole shrinks.

Woods said the job Gil Hanse has done to restore the course four years ago will be on display this week as golf continues to evolve.

“We’re getting these young kids hitting the ball high and far. A couple of par-5s are 630 (yards) and some of the guys are getting in there in two, depends on the wind obviously. Guys have a lot more power than what we did in ’07.

Related: How all 4 golf major are unique

Ultimately, Tiger isn’t the only one that has had previous experience with Southern Hills.

Being in Tulsa, Okla. Southern Hills has also become a site for college golf events, including the Big 12 Championship.

As a result, Southern Hills is a known course to younger players on the PGA Tour, including Viktor Hovland, who is an Oklahoma State alum and played a Big 12 Championship there.

Hovland, who is the No. 6 golfer in the Official World Golf Rankings, is one of five former Oklahoma State Cowboys in this week’s PGA Championship field.

With most of the PGA Tour events taking place outside the Sooner State, Hovland said it was strange to drive rather than to fly to a city for a tournament.

“Living in Stillwater, it feels like you’re away from the PGA Tour a little bit. You get to relax, which is very nice. I like that aspect of it, but it’s kind of weird just driving an hour away from Stillwater and then suddenly here at Southern Hills and playing a major championship.”

Viktor Hovland on getting to play in a familiar atmosphere

When it comes to the golf course, the 24-year-old said players have to focus on hitting fairways and execute shots around the greens from the putter and the wedge.

“I remember there being a lot more trees the first time I came here,” Hovland said. “They’ve added a bunch of length and they made it a bit more open, but at the same time, you still got to drive it really well out here. So that aspect, I feel like it fits me really well.

“There’s no really faking it, but you got to have a lot of good short game shots around the greens because it’s all fairway around green.”

There is representation from other Big 12 schools in the PGA Championship field, including World No. 1 golfer Scottie Scheffler, who attended the University of Texas.

The former Longhorn said the course changes are minimal.

“I played two college events here and one amateur event and then I came out here a couple weeks ago and played a practice round. Outside of that, I didn’t feel like Gil made any massive changes to the course, so it still played fairly similar to how I remember it other than a lot of the runoffs are a bit different. Outside of that, it still feels pretty much the same.”

Scottie Scheffler on his past experience at Southern Hills

Scheffler is coming off a couple of top-20 finishes after winning his first major at the Masters Tournament last month.

The 25-year-old said winning big tournaments, such as The Masters, the PGA Championship, the Open Championship, or the U.S. Open, means executing shots with all 14 clubs in the bag.

“In order to win major championships and beat these amazing fields, you’ve got to have faith in all aspects of your game,” Scheffler said. “You can’t really be protecting against anything because you’ve got to put it all on display out here and to get around this golf course, it’s not going to just be pure ball striking or anything like that. It’s going to take a variety of different things to play in order to play well.”

Scheffler is looking to join a very exclusive class of golfers to win the Masters and the PGA Championship in the same year, including Woods, Jack Nicklaus and Sam Snead this week at Southern Hills.

And Scheffler has only been on the PGA Tour since 2020.