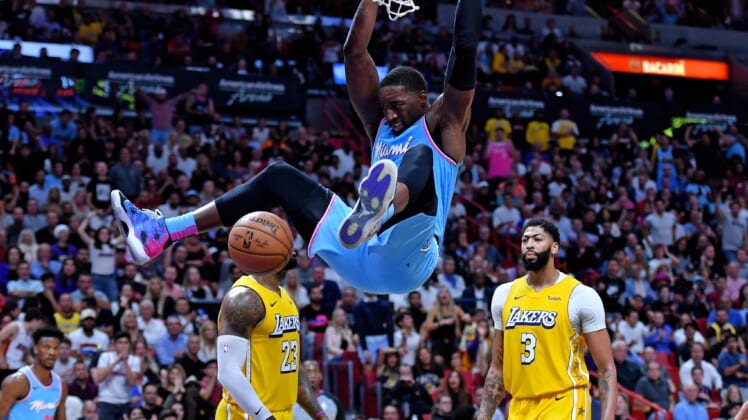 The Miami Heat are heading to the NBA Finals. Miami eliminated some of the best teams on a not-so stagnant journey within Orlando’s bubble, shutting down the Milwaukee Bucks in the conference semifinals and the Boston Celtics during the Eastern Conference Finals. They’re drawing comparisons to underdog championship teams like the 2004 Detroit Pistons and the 2011 Dallas Mavericks. And their final test will begin against a familiar face in LeBron James when taking on the Lakers in Game 1 Wednesday night.

While Miami could go down in history as one of the greatest lower-seeded playoff teams ever, its work is far from finished. Like in their last two playoff series, the Heat are billed as underdogs — sportsbooks are giving the Lakers more than a 66% chance to win.

Los Angeles won both regular-season matchups against Miami back in late 2019. After acquiring veterans Andre Iguodala and Jae Crowder before the trade deadline in early February, the Heat improved on defense, particularly in the bubble.

Goran Dragic went from accepting a sixth-man role in the regular season to starting at point guard for the Heat during the playoffs, averaging 20.9 points and 4.7 assists per game. And Jimmy Butler, the self-proclaimed half-Slovenian brother of Goran, is matching their teammate chemistry with twin-like numbers, tallying 20.7 points and 4.5 assists per game.

Things are looking up for a group that Pat Riley called the “hardest-working, best-conditioned, most professional, unselfish, toughest, meanest, nastiest team in the NBA.”

However, as eager as this franchise is to speak title hopes into existence, Heat culture is only a part of the recipe Miami will need. Here’s five keys for Miami in the 2020 NBA Finals against the favored Lakers.

2020 NBA Finals: Heat must depend on deep rotation

Miami must expand its rotation within the first two games to ensure the responsibility of guarding stars like Anthony Davis and LeBron James is shared instead of delegated. Matchups become less predictable for offenses to respond to if four or five decent defenders break up these big jobs into smaller pieces. Players can retain more endurance if this is the case. It would allow for Bam Adebayo to stay in games even longer.

The Heat are capable of stopping elite inside scorers when using lineups loaded with disciplined, switchable defenders applying ball pressure from nearly every direction.

Andre Iguodala is battle-tested against Los Angeles’ brightest star in LeBron, having won the NBA Finals MVP award for guarding him in 2015. This time around, he will need to help Adebayo against Davis, at least whenever he is eight feet out. Iguodala performed well as a small ball center against the Celtics in Game 4, posting a ridiculous plus-minus of +20. But the Lakers’ size could force him to play on the perimeter more if the Lakers play multiple bigs at once.

Derrick Jones Jr. fits what Miami needs on defense. Don’t let his 7.6 minutes per game in the Eastern Conference Finals fool you — he readily accepted the task of guarding LeBron last December before Pat Riley schmoozed his way into landing Iguodala and Crowder. Plus, Jones Jr. scored 17 points in 28 minutes of action in the same game.

Solomon Hill is serviceable in short doses if Duncan Robinson is targeted on drives or if Adebayo is not receiving help against Davis. Otherwise, players like Kendrick Nunn and Meyers Leonard can only defend players at one position, meaning benching them for this series makes sense. Spoelstra should use at least nine players most games durin the NBA Finals

The Heat have played more zone defense than any playoff team in the bubble. Despite Boston’s talented three-point shooting cast, Miami deployed the 2–3 against the Celtics, and the Heat still held the Celtics to 33.5% from beyond the arc. Plus, the same scheme was relatively effective for the Heat this season, holding the Lakers to .975 points per possession.

Spoelstra knows the answer is not to entirely play zone all series. Instead, he should use it against Lakers lineups featuring multiple bigs or LeBron when he repeatedly slashes inside without resistance. Miami’s 2–3 can prioritize rim protection with Bam Adebayo in front of the goal while hiding worse defenders like Duncan Robinson and Kelly Olynyk from guarding Davis or LeBron.

Beating the Lakers requires limiting touches for LeBron and Davis. It even forces the duo to rely on teammates to beat the Heat away from the rim. The 2–3 also encourages the Lakers to take longer shots (they only made 36.7% of their midrange attempts and less than 29% from three against the Heat this season). Los Angeles often collapses the zone by showing Davis in the middle of the floor, where he fires 16 footers with ease. Nevertheless, giving up contested long twos and threes is better than escaping the wrath of posterizing dunks that never stop.

Of course, the 2–3 is not the be-all and end-all solution for the Heat since it is confusing to run in transition. The Lakers rank first in transition scoring (23.3 points per game) during the playoffs. LeBron James has resurrected Showtime basketball in Los Angeles, pushing the ball up the floor quickly and hitting teammates for buckets. They are not exactly playing on rollerblades with their average PACE rating (98.7). Regardless, Lakers head coach Frank Vogel wants his team to capitalize off uncontested looks that are too good to pass up.

When the Lakers play their smallest lineups, Miami needs to go man-to-man. The Heat upset the Bucks with aggressive help man-to-man defense against back-to-back MVP Giannis Antetokounmpo, one of the best transition scorers in the league. Miami slowed him down with a ‘wall’ of three or more defenders for three or four seconds before players returned to their defensive assignments, limiting team possessions and scoring chances in the process.

Spoelstra has also used this same tactic against LeBron after he left Miami in 2014. And unsurprisingly, James often passes to teammates in these situations. But three-point marksmen Markieff Morris (43.6%), Kentavious Caldwell-Pope (42.1%) and Danny Green (36.4%) cannot be left open in the Finals, especially when the Lakers go small. Even if the Heat has the personnel to defend LeBron, they need to use their athleticism to match weapons capable of unleashing game-changing runs.

Related: Tyler Herro is a star in the making

Los Angeles takes away pick-and-pop threes — which Miami loves to shoot — with late defensive switches. Yet the problem is that when the Lakers use this tactic, they sometimes put Javale McGee, Dwight Howard or Anthony Davis through these. This allows the Heat to flip the script by forcing enough rotations and changes in man-to-man assignments to create mismatches against less switchable players like Rondo or McGee.

Empowering Jimmy Butler in these scenarios will be critical for the Heat. Getting clean looks at the basket is already going to be a challenge against a superb shot-blocking Lakers team. Nevertheless, Butler scored eight points in just 42 seconds when McGee guarded him this season — which is over a point every six seconds. He even scored a combined nine points in under two minutes against Howard or Davis in the same period. Long story short, Butler must force bigs to win defensive matchups with their feet.

Luckily, Butler commands enough attention from distant off-ball defenders when driving to the basket. Since Miami was one of the best three-point shooting teams in the league this season (37.9%), perimeter defenders on the Lakers could become conflicted. Should they overcommit to dribble penetration from Butler, he is capable of finding spot-up three-point shooters like Duncan Robinson (43.5%) or anyone else with the hot hand.

On pick-and-rolls, Bam Adebayo is scoring an impressive 1.39 points per possession as the roll man. While he is still developing his three-point shot, he entered the playoffs as one of the best rebounders league-wide. Adebayo is also averaging over 11 boards per game since the first round, helping him score 1.11 points per possession off put backs.

Expect the Lakers to throw Anthony Davis at Bam. It will be hard for Adebayo to win this matchup on strength alone. Put backs and pick-and-roll scoring will be harder to come by, just like they were in both regular-season meetings between the Lakers and Heat. Of the 23 total points Adebayo scored against the Lakers, only four were against Davis. The latter is one of the few bigs capable of stopping Adebayo one-on-one in a tight playoff series.

However, Bam’s passing ability remains underrated to the point where teams do not expect him to facilitate for teammates. His 4.9 assists per game have come from virtually everywhere on the floor this postseason. And the Lakers have not yet proven they can take away his ability to create.

So when perimeter defenders like Kentavious Caldwell-Pope ‘dig’ on post-ups or apply pressure in the midrange, Bam must respond by distributing the ball to open shooters and cutters. Without a dynamic style of play against an intelligent L.A. defense, they will remain comfortable and untested. Forcing them to play on their toes and make difficult decisions will further unleash the fluidity and versatility of the Heat offense.