There are three monster games on the slate for college football Week 5, as well as other contests worthy of our attention.

In particular, the battles between Stanford and Washington, Wisconsin and Michigan and Louisville against Clemson have us excited for the upcoming weekend.

We’re taking a deep dive into those contests as well as plenty more here as we look at the top storylines heading into college football Week 5.

1. All eyes on Louisville vs. Clemson

There hasn’t been a team as consistently knock-your-socks-off impressive as No. 3 Louisville this year.

It was easy to wonder about how good the Cardinals actually are this season until they blew out Florida State in Tallahassee earlier this month. Now there is no doubt.

After a 7-touchdown performance in Week 4, Louisville QB Lamar Jackson retains the top spot in this week's Heisman Watch. pic.twitter.com/aGiVUWE8VY

On the other side, No. 5 Clemson sputtered out of the gate to open its 2016 campaign. Deshaun Watson wasn’t sharp, and the Tigers barely scratched their way past Auburn and Troy.

Two convincing wins later, though, and it looks like Dabo Swinney has his group ready for the upcoming ACC tilt against Louisville.

To give you an idea about just how much hype surrounds Louisville right now, the Cardinals are actually slight favorites to beat the Tigers in Death Valley.

Truly, the hype is deserved. Jackson, all by himself, has scored more touchdowns than the entire Tigers offense (25 for Jackson, 14 for Clemson). The Cardinals have averaged 63.5 points and 682 yards per game.

But fortunes regularly change in an instant — especially when top teams clash.

Nobody should count out Watson and the Tigers at home Saturday night. 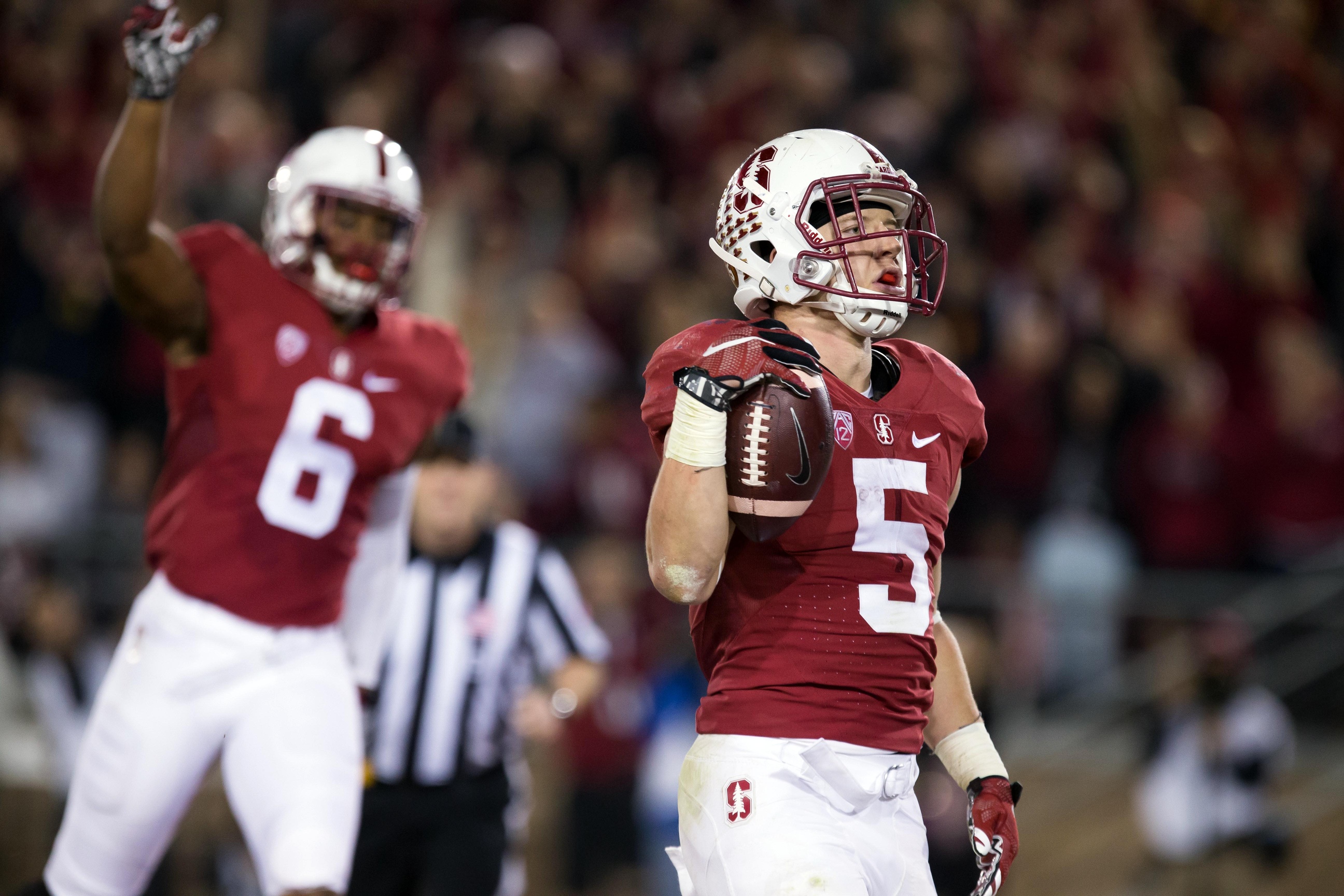 After barely escaping Pasadena with a win against UCLA last weekend, No. 7 Stanford goes from the frying pan into the fire in Week 5. Up next is another road game against undefeated No. 10 Washington.

It’s the first game for either Pac 12 power against a ranked opponent.

In particular, it will be interesting to see if Washington can contain Christian McCaffrey, who has been productive this year but not dominant when it comes to finishing drives with touchdowns (four so far).

In fact, Stanford has been quite impotent offensively this season aside from the exploits of its brilliant running back. The offensive line isn’t as complete as we’ve seen in years past, and the passing game averages a pitiful 137 yards per game.

Washington comes into the contest with significantly more firepower on offense and with a defense that is built to shut down the pass.

If the Cardinal can grind out long drives and can finish with touchdowns, then the game is winnable. If Washington can keep McCaffrey contained, then the Huskies should run away with this one at home.

This Big Ten matchup is one you won’t want to miss if you enjoy physical slug-fests.

No. 8 Wisconsin has been one of the biggest surprises of the young season. The Badgers have already knocked off two ranked opponents, most recently putting the screws to Michigan State after previously taking down LSU.

Horibrook gives Wisconsin’s a vertical passing game, which significantly opens up the rest of the field. It could also be a huge factor in this one in the light of top cornerback Jeremy Clark’s knee injury (more on that here).

On the other side of the ball, the Badgers feature the nation’s No. 10-ranked run defense and have allowed just one rushing score all year.

This should set up a magnificent battle against Michigan’s power-rushing attack. The No. 4-ranked Wolverines have averaged almost 300 yards per game, racking up 15 touchdowns.

Something has to give.

Another interesting storyline concerning this game is that Michigan passed Notre Dame last weekend to become the winningest team in college football history. A loss against Wisconsin, combined with a Notre Dame Win against Syracuse, would cause the teams to trade places.

We can’t wait to see which Big Ten power remains undefeated on Saturday. 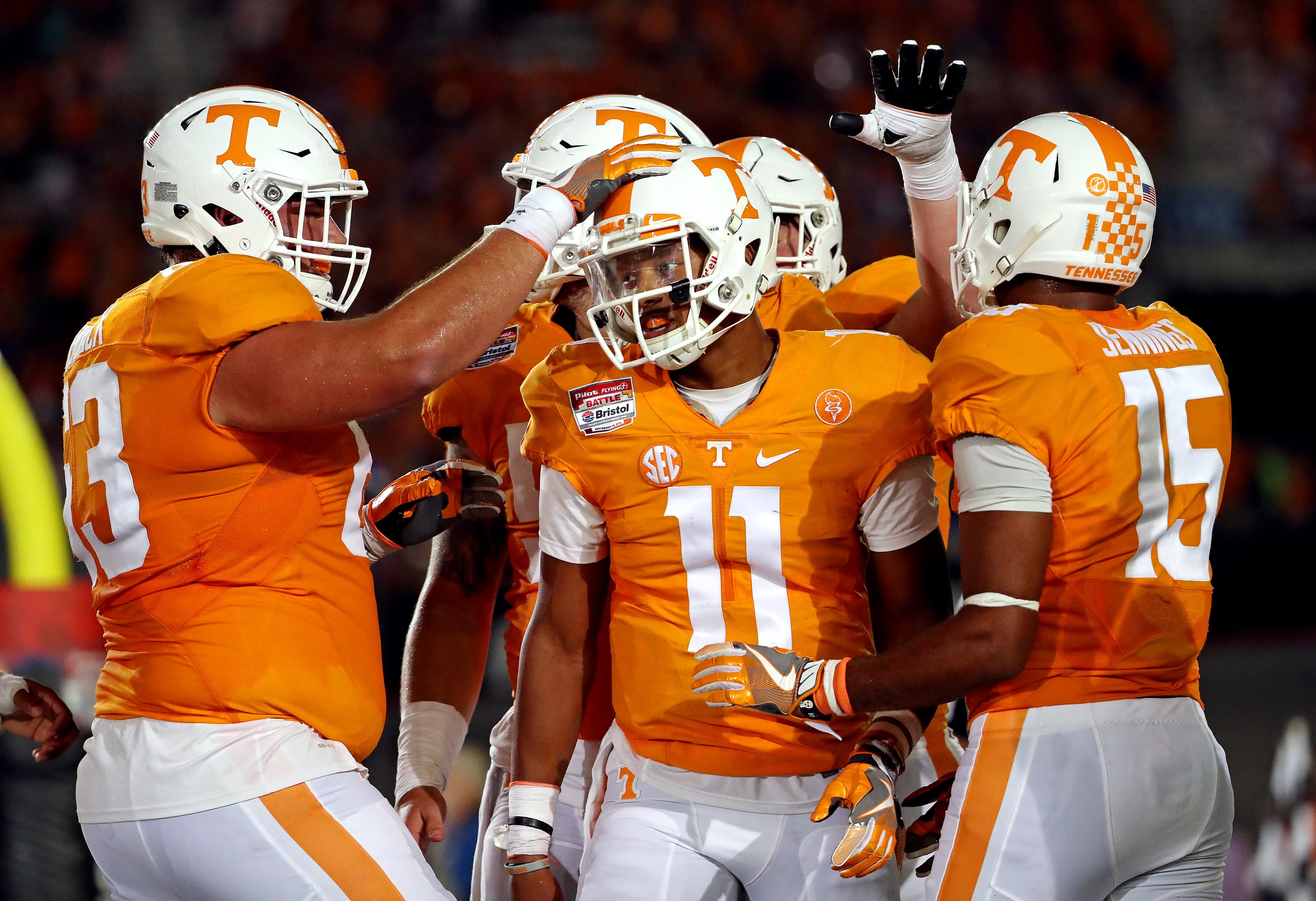 Dating back to October 31 of last year, No. 11 Tennessee hasn’t lost a game. With the thrilling win last weekend over Florida, this streak improved to 10 straight games — the third-longest current streak in college football.

The Volunteers will take this winning streak into Athens, Georgia on Saturday to battle a No. 25-ranked Bulldogs team that might be a bit feistier than usual. Georgia got a huge wakeup call last weekend when Ole Miss dropped the hammer to the tune of a 45-14 thrashing.

Tennessee won last year by a touchdown over its rival, but Georgia has won five of the last six.

One of the biggest keys could be whether or not Nick Chubb is healthy enough to play. He was held out of the entire second half last week after he suffered an ankle injury. Brian Herrien and Sony Michel both are capable of being productive, but neither compares to Chubb, who is one of the nation’s best.

Tennessee has been stout against the run, allowing less than four yards per carry and just four rushing scores this season. So it might not matter who starts behind Jacob Eason.

And if Josh Dobbs can keep things going through the air for Tennessee, the Vols might just pull away in the second half.

Mind you, this was after Kelly said coaching “had nothing to do” with the loss against Rice.

Already in a 1-3 hole to open the season, Notre Dame is going to fight an uphill battle to get back to .500 this year.

Syracuse provides the Irish with a nice opportunity to bounce back. Then again, that’s exactly what Rice was supposed to do after this team lost to Michigan State. At this point, nobody knows what to expect from Notre Dame going forward.

The only thing that has been consistent is the play of quarterback DeShone Kizer, who looks like he has the tools to succeed at the next level, too.

The 2-2 Orange are “hosting” this game at MetLife Stadium, and they have the offense to give Notre Dame trouble. The Irish should win, and win big, but they haven’t been living up to expectations this year.

6. Oklahoma much better than 1-2 record suggests 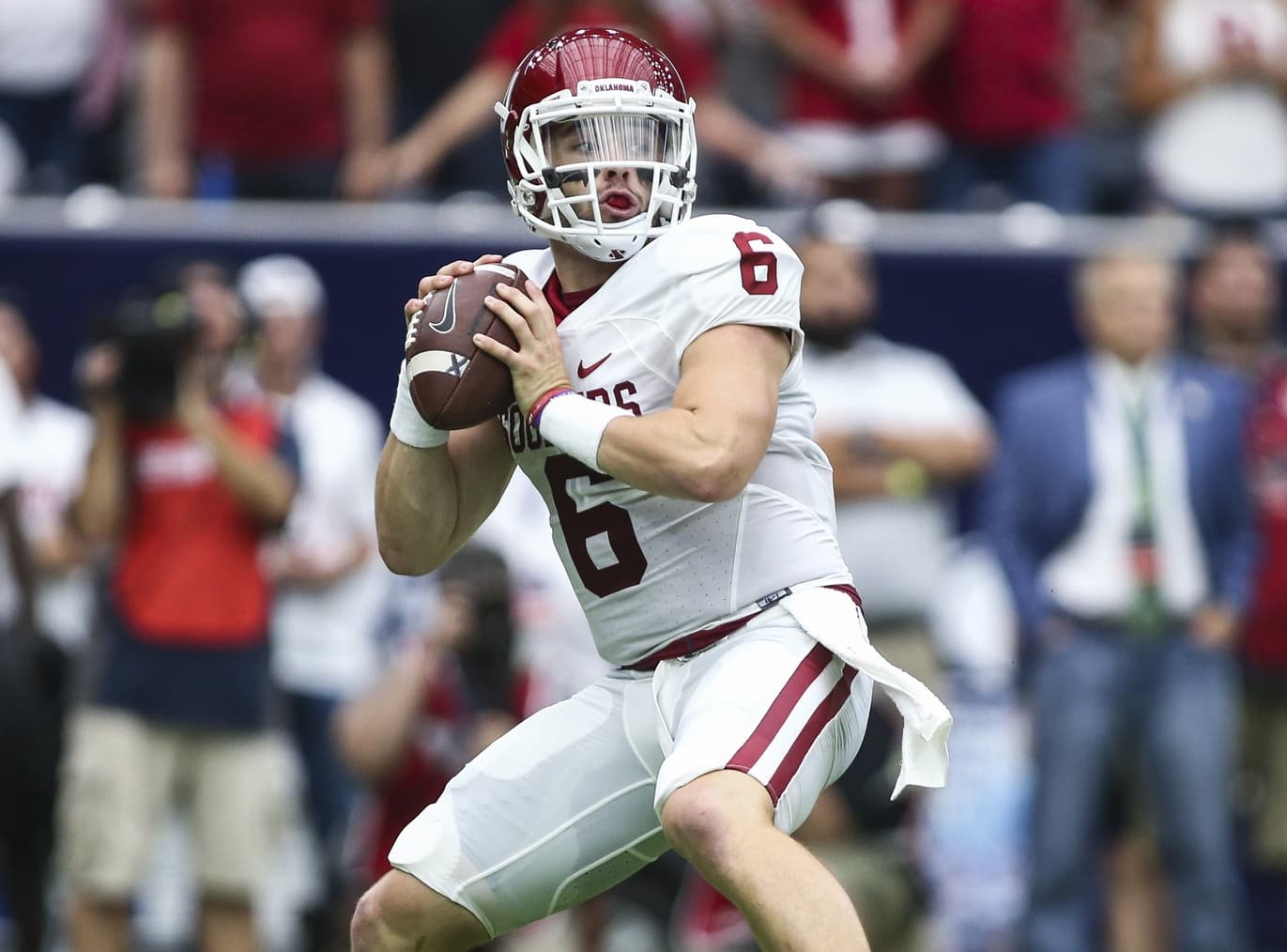 Oklahoma will take on No. 21 TCU Saturday evening, and it could be quite the shootout.

Despite their 1-2 record, the unranked Sooners are much better than their record. It just so happens two of their first three games came against No. 5 Houston and No. 2 Ohio State.

“Once we get rolling, I feel like we’re going to be pretty damn good,” head coach Bob Stoops said after Ohio State pasted his program last weekend, per Consumnes Connection.

The biggest issue for Oklahoma right now is that its defense is giving up almost 32 points per game. TCU averages almost 43 per game, and Kenny Hill is dangerous against undisciplined defenses.

But the Sooners have a dangerous offense of their own, led by Baker Mayfield, who Ohio State defensive coordinator Greg Schiano compared to Brett Favre last week.

It should be a fun game to watch, if you don’t mind a lot of offense and not much defense.

7. Can Cal upset another ranked team?

The scrappy Cal Bears are hosting No. 18 Utah Saturday afternoon. This sets up Davis Webb and Co. with a prime opportunity to knock off a ranked team for the second time in three weeks. The gunslinger outplayed Shane Buechele until he was banged up, beating the Texas Longhorns (No. 11 at that time) in Berkley by the score of 50-43 in Week 3.

The Utes should present quite the challenge for Webb and the pass-happy Bears. They currently rank No. 29 in the nation allowing 182 passing yards per game, and they  have allowed just two passing touchdowns.

Considering Cal’s offense almost exclusively comes by way of Webb (459 yards, 4.5 touchdowns per game) and receiver Chad Hansen (164 yards per game, six total touchdowns), it’s going to be fascinating to see if Utah’s defensive trend holds true or if the Bears can still make hay through the air.

Utah’s offense is more of a plodding unit that prefers to grind out drives with a relentless rushing attack. Quarterback Troy Williams is quite capable of making sound decisions and big throws. But an offensive shootout isn’t the kind of game he plays well.

Davis Webb to Chad Hansen for the Cal TD pic.twitter.com/W4rsDBJ0rp

Given the chemistry between Webb, Hansen and his other receivers, we’re looking for an upset in this one. 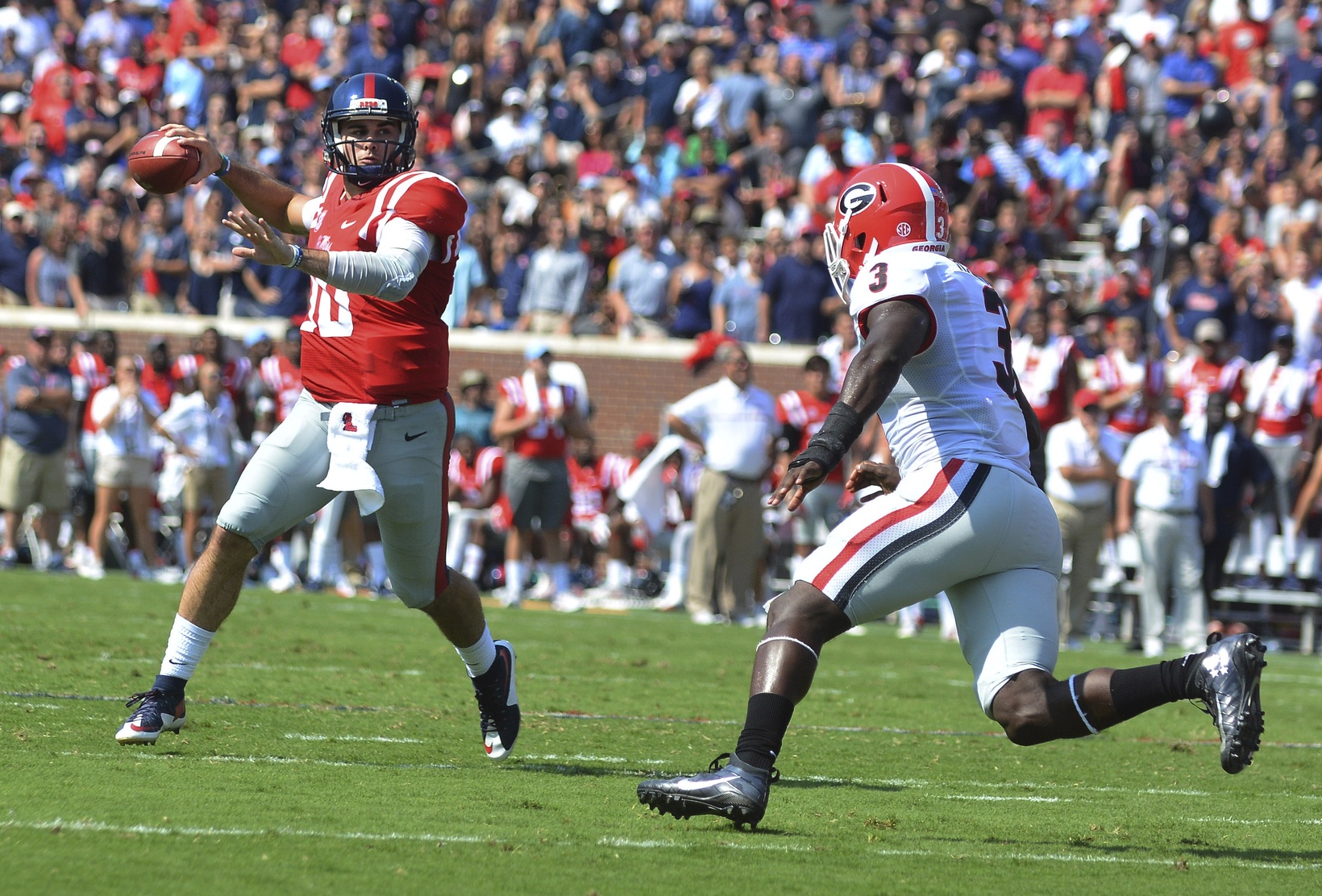 Get your track shoes ready, because Memphis and No. 16 Ole Miss will be running. As in running up the score.

The Rebels are a few late-game blunders against top teams away from being 4-0 right now. Quarterback Chad Kelly can sling it with the best of them. His deep-ball connections with his deep group of receivers is extremely tough to stop.

Chad Kelly has connected deep down the field with almost all his receivers at one point or another. Incredible distribution. #OleMiss pic.twitter.com/kKNPrdAiZd

The Rebels are being favored by more than two touchdowns at home against the Tigers Saturday. But fans shouldn’t underestimate this American Athletic Conference squad.

Though they have not yet faced an SEC program this year, the Tigers have allowed just nine points per game. In concert with a dominant defense, Memphis features a balanced offense that has scored nearly 52 per contest and could potentially keep up with Kelly and the Rebels.

It should be a fun game to watch.

This game can either make or break LSU’s season. Already at 2-2, despite not playing any ranked teams (when they played them, at least), the Tigers have yet to even get into the toughest part of their schedule.

The offense has been a disaster. Neither Brandon Harris nor Danny Etling has been able to consistently divert attention away from star running back Leonard Fournette, who has been banged up since Week 1.

After losing to Auburn in Week 4, both head coach Les Miles and offensive coordinator Cam Cameron were fired. Now it’s up to interim head coach Ed Orgeron to find a way to right the ship. He has experience, being the interim head coach after USC fired Lane Kiffin. He went 6-2 during his stint with the Trojans.

Missouri isn’t exactly the most threatening SEC opponent out there, but it definitely has enough firepower to make things interesting Saturday. Coming in with a 2-2 record as well, these Tigers were beaten by the Georgia Bulldogs two weeks ago in a tightly contested battle that came down to the final minutes of action.

Quarterback Drew Lock leads a high-scoring offense that could potentially put LSU in the difficult position of having to play from behind early.

If Orgeron can’t figure out a way to get his offense sparked, the Tigers will fall to 2-3. If that happens, things could start rolling downhill in a hurry. With upcoming games against No. 23 Florida, No. 1 Alabama, No. 20 Arkansas and No. 9 Texas A&M, LSU could be looking at its first losing record since 1999.

It was quite the wake-up call last weekend when the Spartans (No. 17) played host to Wisconsin and ended up getting pounded, 30-6 in front of their home crowd.

The program is also playing this weekend with a heavy heart after former Spartans linebacker Mylan Hicks was killed at a bar in Calgary, Canada. The players will be honoring Hicks by wearing No. 6 on their helmets.

Needless to say, there is a lot of reasons to be motivated this weekend when Michigan State takes on Indiana.

The Hoosiers have been able to put up points (30.7 points per game) and move the ball well on offense (516 yards per game), but they haven’t faced a defense like the one Michigan State features. In particular, the Spartans are loaded up front, featuring a stout line and tremendous linebackers.

We fully expect Mark Dantonio to have his team ready to play at its highest level Saturday night when they hit the field at Memorial Stadium. A loss here would likely drop the Spartans out of the top 25, barring other big losses by top teams.