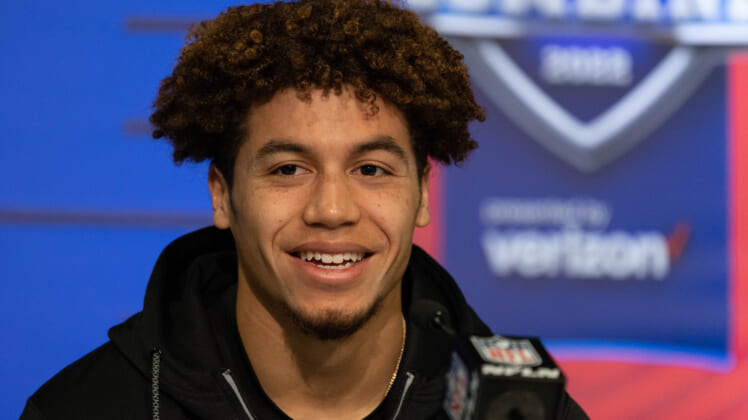 As teams finalize their draft boards with just over 24 hours to go before the first round of the 2022 NFL Draft gets underway, there’s one cornerback prospect who’s generating some late buzz, which could help him rise up the ranks. No, it’s not even Sauce Gardner, Derek Stingley Jr., or even Trent McDuffie. Instead, it’s Zyon McCollum out of Sam Houston State, an FCS program.

Sure, he may not be like the others listed above, who are all projected to be first-round picks on Thursday night, but McCollum has all of them beat in one specific category that’s highly important for playing the cornerback position, especially in the NFL. What advantage does McCollum have over the top cornerback prospects in the draft? His athleticism.

Zyon McCollum’s athletic score is off the charts

According to Kent Lee Platte, the inventor of the famed “RAS” or Relative Athletic Score, McCollum graded out with a perfect 10/10 score. How rare is this for a cornerback to achieve? Extremely rare, in fact, it’s never happened.

Needless to say, a score of this nature should help improve his standing among some analysts.

At 6-foot-2, 199 pounds, McCollum sprinted out to a 4.33 40-yard dash time at the NFL Draft Combine. This helped put him on the map, helping many evaluators take further notice of what they saw on tape in college. McCollum also had a 39.5″ vertical leap. But it’s not all measurables with McCollum, he also intercepted 13 passes in college.

So on draft night when you’re hearing about the impressive athleticism of the top corners, remember the name Zyon McCollum. He may not be a first-round prospect, but whoever lands him (likely on Day Two or early on Day Three), could be getting an athletic freak who has all the intangibles needed to succeed at the next level.