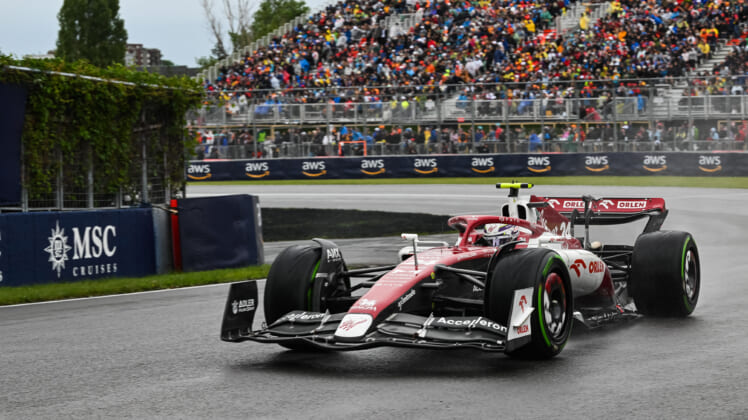 Early on Sunday morning with thousands tuning into the British Grand Prix, it didn’t take long for a gut-wrenching scene to occur. In the very first lap, Chinese Formula One driver Zhou Guanyu unfortunately was part of a destructive collision that flipped his car, sending it spinning and skidding off the racetrack. It eventually hit a boundary barrier, ending up positioned against the outer fence.

Footage of the Zhou Guanyu crash

What appeared to happen, based on the clip below, was George Russell’s car getting clipped from the middle/left rear tires, which sent his car into Guanyu’s Alfa Romeo, causing the wreckage.

After realizing what just occurred, Russell actually stopped his vehicle and hopped out of the car to go try and check on Guanyu.

And here’s another glance at the crash, only from a different angle to show just how far Guanyu’s car slid, as well as the scary landing point, not only for him, but for the spectators in attendance.

While this crash serves as the latest reminder, that while competitive sports can be an exciting sight to behold, there’s still human beings inside of those race cars, and when high-impact crashes occur, it can lead to disastrous outcomes.

Luckily in this case, Guanyu made it out OK. Shortly after the crash, Guanyu was transferred to a medical facility in Silverstone, England, which is where the race took place. In addition to Guanyu receiving medical treatment, Williams Racing driver Alexander Albon also received some medical care after his car also spun into the wall.