The Arizona Cardinals are entrusting rookie first-round pick Zaven Collins, with an immediate starting linebacker spot at the expense of Jordan Hicks.

The Arizona Cardinals raised eyebrows when they drafted versatile linebacker Zaven Collins 16th overall in the 2021 NFL Draft, but they’ve already decided he’ll be a Week 1 starter, which means Jordan Hicks will seek a trade.

This rather surprising news came from NFL Network’s Ian Rapoport, who implied Arizona envisioned a different role for Collins before the offseason program got underway, and broke down Hicks’ finances:

Collins has pretty big shoes to fill, because Hicks has racked up 268 combined tackles in two seasons with the Cardinals.

On the other hand, Hicks’ Pro Football Focus grade hasn’t been up to snuff, as he ranked 43rd out of 90 linebackers in 2019 and 54th out of 83 last year despite the high production totals. 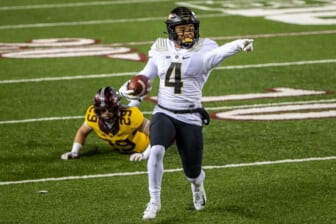 Also Read:
Arizona Cardinals draft WR Rondale Moore in the second round of the 2021 NFL Draft

Especially when The MMQB’s Albert Breer reported that Collins’ weight went up 11 pounds to 270, it seemed like the Tulsa star would be deployed in a hybrid role, but groomed to be more of a 3-4 edge defender.

Arizona already added J.J. Watt in free agency — who has inside-outside versatility as a defensive end or stand-up rusher — and has had Chandler Jones on the roster for some time. Collins almost felt like a luxury pick when he got drafted.

Apparently, the Cardinals have already seen enough to feel confident that Collins’ phenomenal coverage skills he showed in college can translate to the NFL, despite his extraordinary size and the caliber of athletes he’ll be facing.

It’s just not normal to see someone with Collins’ size move as well in space as he does. Because he did line up at times on the edge at Tulsa, though, he can still be an effective situational player there while also wreaking havoc as a blitzer up the middle.

If the Cards can lock in Collins and 2020 first-round pick Isaiah Simmons at the inside linebacker spots, and they each make strides as run defenders, this front seven can be truly scary.

Now that Collins’ role in the desert is a little more clearly defined, let’s break down what this means for Hicks’ future.

Still turning only 29 in June, it’s obvious that Hicks’ production isn’t slowing down, and his modest contract will certainly make him an attractive trade target. If a deal of that variety doesn’t come to fruition, Philadelphia could always release him on or after June 1 and allow Hicks to choose where he signs.

Hicks began his career with the Philadelphia Eagles, where he established himself rather quickly as one of the most underrated linebackers in the sport. He may want to go back to a situation where he’s playing as a true MIKE linebacker in a base 4-3 defensive scheme.

Among contending teams who could use someone with Hicks’ coverage savvy and nose for the football and deploy a base 4-3 alignment, the Buffalo Bills stand out as a possible destination. Tremaine Edwards hasn’t really met expectations as a first-round pick. Beyond him and Matt Milano, that group could use some competition and depth.

The Kansas City Chiefs are another possibility. They drafted a run stopper in Nick Bolton this year, so Hicks’ skill set and leadership would be a nice complement to Bolton and rising second-year ‘backer Willie Gay Jr.

If staying in the NFC is more Hicks’ speed, maybe he could go to the Atlanta Falcons. That team desperately needs help on defense, and pairing up with an elite talent in Deion Jones might make Atlanta an appealing destination to Hicks.