What were the positives and negatives from each team in action on the highly-anticipated WNBA Opening Night? Let's break it all down.

The WNBA’s 25th Anniversary season officially tipped off Friday with four games on the slate. WNBA Opening Night included the highly anticipated return of the 2020 No. 1 overall pick, the debut of the 2021 top draft pick, and the beginning of a new era for the Los Angeles Sparks.

Each team had their ups and downs in their season debuts as they begin to build chemistry in hopes of being one of the eight teams to make the playoffs making a run at the WNBA Finals.

Here are the ups and downs for each team in all the WNBA Opening Night games. 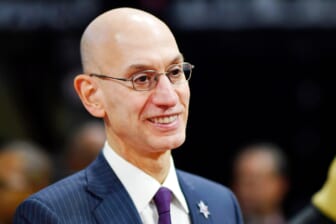 In her first game since suffering an ankle injury in her rookie season that forced her to miss 19 of her team’s 22 games, Sabrina Ionescu began her sophomore campaign with a bang. She posted a double-double with 25 points and 11 assists adding six rebounds including the three-pointer that gave the lead with 0.4 seconds remaining in the game leading to their eventual 90-87 win.

Meanwhile, veteran forward Betnijah Laney had played incredible in her New York Liberty debut scoring a game-high 30 points on 61% shooting adding five rebounds. This included scoring 11 points in the opening quarter that also saw her make three of her four three-point shots in the game.

While the Indiana Fever’s bench did not play much better, the outperformed New York Liberty’s bench by a mile. The Liberty’s bench was almost non existent in the game combining to contribute more turnovers (seven) and fouls (eight) than they did points (five) in the game.

One of the Indiana Fever’s weaknesses in their game against the Liberty was their 3-point shooting, which saw them miss 15 of 18 attempts. However, their execution in the final minute of the game was arguably worse. Leading 86-82 with 47 seconds remaining in the game, the Liberty went on a 8-1 run to win the game. The run included two Sabrina Ionescu treys and free throws.

The two forwards for the Connecticut Jonquel Jones and DeWanna Bonner helped lead their team to victory with impressive performances in their season debut. The former finished with 26 points, eight rebounds (four offensive rebounds) and three assists while the latter recorded 21 points, seven rebounds, five assists and three blocks.

Not much went wrong for the Connecticut Sun in their season opener against the Atlanta Dream leading wire to wire securing a 78-67 victory. There was some things for them to ponder over in film sessions including their free throw shooting and their inability to take care of the ball. In the game, they shot 14-of-22 from the free throw line in the game and recorded 20 turnovers to the Dream’s 13.

Up: Defensive effort amid adversity

The Atlanta Dream had a disastrous season debut, finding themselves trailing by as many as 20 points in their season debut. However, their effort on the defensive end deserved much praise. They recorded 14 steals and seven blocks as a team. This included Monique Billings coming off the bench finishing with four blocks and three steals.

As previously mentioned, it was an off night for the Atlanta Dream in their season debut and that could be bogged down to their struggles shooting from the field. They shot 36% from the field and 16% from 3-point range with their bench shooting a dismal 1-of-12 and missed all five shots from deep.

Up: Starters showing out

Each of the Phoenix Mercury starters scored in double figures contributing 72 of their team’s 77 points. Skylar Diggins-Smith led the team with 18 points followed by Brittney Griner with 17 points, 12 rebounds and three blocks. Diana Taurasi had an off shooting night but still contributed 14 points, eight rebounds, five assists and three blocks. Brianna Turner posted a double-double with 13 points and 10 rebounds while Kia Nurse rounded it off with 10 points.

Like the Indiana Fever, the Phoenix Mercury struggled shooting from three-point range shooting 4-for-20 from beyond the arc. However, unlike the Fever, the Mercury were able to convert from 3-point range in the final seconds of the game to secure the win although under controversial circumstances. While bringing the ball down court after forcing a turnover in the final 10 seconds of the game down by one point, the clock stopped running with play continuing leading to Diana Taurasi hitting what would become the game winning three for her team.

At the end of the first half, the Minnesota Lynx found themselves down 33-24 with the Mercury holding seemingly all the momentum. The Lynx went on a 17-6 run to take a 41-39 lead their first lead since they led 6-5 with 5:46 to go in the first quarter.

Although the Lynx would go into the fourth quarter trailing by three, they continued to find ways to keep themselves in the game. Ultimately, it was their inability to take care of the ball in the final quarter that led to their loss. They committed four fourth quarter turnovers including a turnover in the final seconds that led to Diana Taurasi’s game-winning three.

Up: Cleaning the glass

The Dallas Wings secured the most dominant victory of opening night beating the Los Angeles Sparks in their first game of the post-Candace Parker era. Their biggest success was on the boards outrebounding the Sparks 45-25. The Wings’ top four rebounders outdid the Sparks entire team compiling 39 of their team’s 45 rebounds.

Down: Abundance of giveaways

Although dominant, the Wings were not perfect as turnovers were a struggle for them in the game. They turned the ball over 26 times to the Sparks 15 including eight players recording multiple turnovers.

Up: The Ogwumike Sisters

In their first season playing without Candace Parker since they drafted her in 2008, there will be a heavy reliance on the play of 2016 MVP Nneka Ogwumike and her former All-Star sister Chiney Ogwumike. They did the best they could for their team with the former posting 18 points and eight rebounds while the latter put up 12 points and six rebounds.

Outside of Nia Coffey who shot four-of-eight from the floor in scoring 10 points, it was a struggle for the Los Angeles Sparks bench. They combined to shoot miss 21 of 24 field goal attempts, netting only 10 additional points outside of Coffey’s contributions. Te’a Cooper had a nightmare game, bricking nine of 10 shots for just four points, while Bria Walker and Jasmine Walker were both failed to record a bucket.