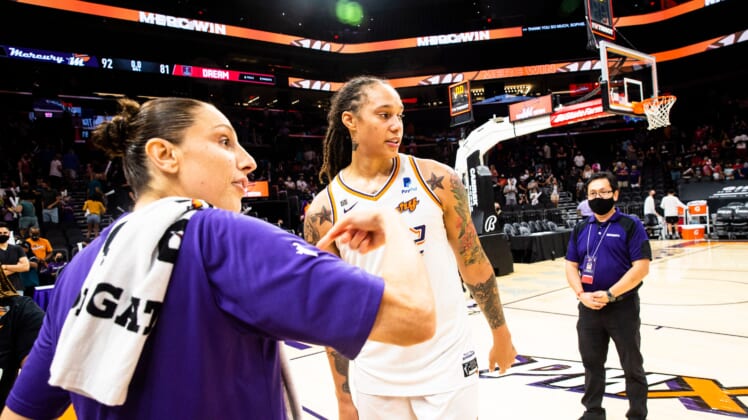 At the conclusion of the WNBA’s first full week following the Olympic break, Jonquel Jones of the Connecticut Sun and Brittney Griner of the Phoenix Mercury have been named the WNBA Players of the Week.

Jonquel Jones continues her incredible season that could see her win the 2021 WNBA MVP. In three games last week, Jones averaged 18.7 points, 11.7 rebounds and 3.7 assists leading the Sun to a 3-0 record.

This season, Jones is averaging 20.6 points and 11.2 rebounds. If she is able to keep up these averages, they would both be single-season records in Sun franchise history.

The Connecticut Sun are tied for the best record in the WNBA at 17-6 currently on a five-game win streak. With nine games remaining on their schedule, they are eight games away from tying a franchise record for wins in a season.

Brittney Griner averaged 20.5 points, 10.3 rebounds, 4.3 assists and 2.5 blocks in four games with the Mercury winning each game. This included an August 19th matchup against the Washington Mystics that saw Griner record her third 30-point game this season finishing with 30 points, 12 rebounds and five assists.

Griner is also in the WNBA MVP discussion this season averaging 20.5 points, 9.8 rebounds and 2.1 blocks so far this season leading the Mercury in each category.

She is one of only two players that ranks in the top five in points (4th), rebounds (3rd) and blocks (1st) this season.